Two New Clips From the Next Episode of STAR WARS: THE CLONE WARS 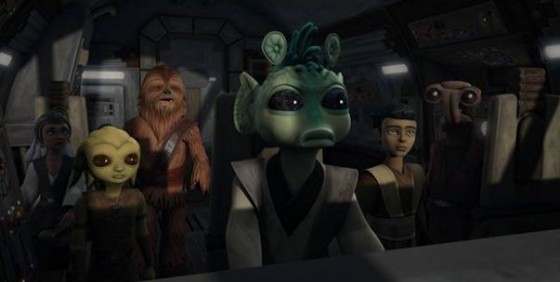 The younglings are on their own in the next episode of Star Wars: The Clone Wars. The third episode in this four-part story arc finds Ahsoka captured by Hondo’s pirates and the younglings working together to infiltrate the pirates’ den, using their wits and courage to launch a daring rescue.

This episode also marks Obi-Wan Kenobi’s reunion with an old adversary, General Grievous, in “Bound for Rescue,” airing this Saturday, November 17th at 9:30am ET/PT on Cartoon Network.

· The wide eyed Ithorian youngling named Byph is voiced by Dee Bradley Baker, the voice of the clones.

· This is the first (and only) appearance of General Grievous this season.

Star Wars: The Clone Wars airs Saturdays at 9:30am on Cartoon Network.