Two New Clips for the Next Star Wars: The Clone Wars 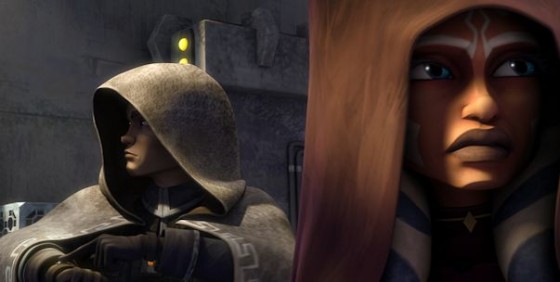 After an unsuccessful rebel attempt to rescue Onderon’s true king, Ramsis Dendup, an unexpected ally steps forward to halt Dendup’s execution and aid the rebel cause in “The Soft War,” the new episode of Star Wars: The Clone Wars, airing this Saturday, October 20th at 9:30am ET/PT on Cartoon Network.

Episode Trivia:
· Gregg Berger joins the cast of The Clone Wars as General Kalani. He is a veteran voice actor known for his work on Transformers (as Grimlock), G.I.Joe (as Spirit), and perhaps most famously, Garfield (as Odie).

· David Kaye plays General Tandin. He’s known as the voice of Clank of Ratchet & Clank videogames, the voice of Optimus Prime in Transformers: Animated and Megatron in Beast Wars: Transformers.