Two Clips From the Next STAR WARS: THE CLONE WARS 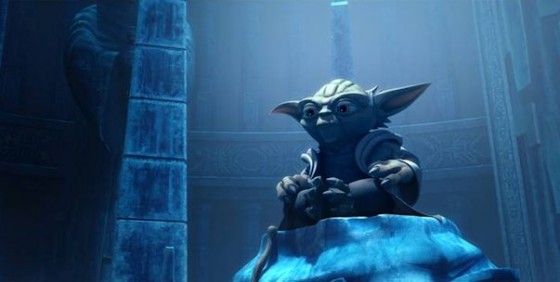 In the next Star Wars: The Clone Wars, Ahsoka escorts a group of younglings to Ilum, where they will learn from Yoda and undergo a crucial rite-of-passage: the construction of their lightsabers. They grapple with both physical and inner challenges as they face the dangerous task ahead of them in “The Gathering,” airing this Saturday, November 3rd at 9:30am ET/PT on Cartoon Network.


Episode Trivia:
· The opening prologue trailer to the episode features a rare flashback to before the Clone Wars, when Plo Koon discovered the baby Ahsoka Tano on an undisclosed planet, and brought her into the Jedi Order.

· The notion of lightsabers being powered by mystical crystals find their roots in the “Kyber crystal” concept in the early draft scripts of Star Wars, a mystical gem said to amplify the power of the Force.

· The symbols denoting the balance of the light side and dark side first seen in the realm of Mortis are visible in the temple entrance on Ilum. The markings that lined the halls of the Father’s Monastery on Mortis are also found within the Ilum temple.

· This episode introduces a Jedi youngling symbol worn as a patch on the students’ cold weather gear.

· The crystals are colorless until the young Jedi holds it, upon which it becomes attuned to the Force-user. This appears to be what governs the colors of Jedi lightsabers.