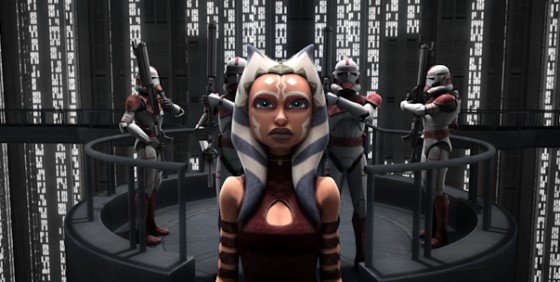 Tension has definitely been building around Ahsoka’s storyline in the most recent episodes of Star Wars: The Clone Wars as we head in to the Season 5 finale. But the press release about the episode is particularly ominous. Is this the end of Ahsoka? Is this the end of Star Wars: The Clone Wars? We’re still waiting on word of a Season 6, either from Cartoon Network or new Star Wars overlord Disney…

The shocking finale to Season 5 of Star Wars: The Clone Wars has arrived, with major revelations that will leave characters forever changed. Ahsoka is wrongly accused for sedition and murder, and is to be prosecuted in the High Courts of the Galactic Republic by a zealous Admiral Tarkin. Seemingly abandoned, Ahsoka’s last hope lies in Anakin Skywalker, who hunts the Coruscant underworld for the real murderer in “The Wrong Jedi,” Saturday, March 2nd at 9:30am ET/PT on Cartoon Network.

This episode – the culmination of five years of development of Ahsoka Tano’s character and her relationship with Anakin – is personally helmed by Dave Filoni, who serves as episodic director in addition to being the supervising director for the series. Underscoring the significance of the finale, composer Kevin Kiner arranged an orchestral score for this episode to better resemble the full, classical score found in the Star Wars feature films.