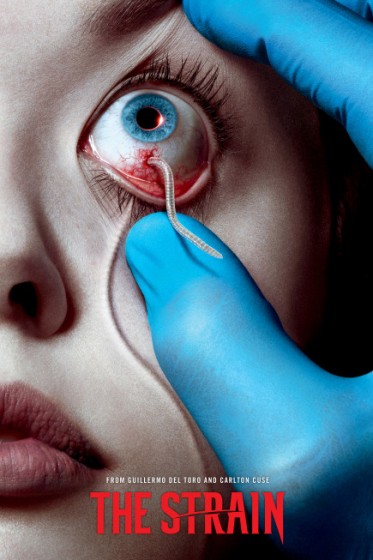 The series premiere of highly anticipated drama The Strain is set for Sunday, July 13 at 10 PM ET/PT. The Strain is a high concept thriller from Academy Award® nominated Filmmaker Guillermo del Toro, author Chuck Hogan and writer/producer Carlton Cuse, which is based on the best-selling vampire novel trilogy of the same title written by del Toro and Hogan. It tells the story of “Dr. Ephraim Goodweather,” the head of the Center for Disease Control Canary Team in New York City. He and his team are called upon to investigate a mysterious viral outbreak with hallmarks of an ancient and evil strain of vampirism. As the strain spreads, Eph, his team, and an assembly of everyday New Yorkers, wage war for the fate of humanity itself. Co-Creators, Executive Producers and Writers del Toro and Hogan co-wrote the pilot script for The Strain, which was directed by del Toro. Emmy® Award winning Writer and Producer Carlton Cuse serves as Executive Producer/Showrunner and Writer. Gary Ungar also serves as Executive Producer. The series is produced by FX Productions. FX has ordered 13 episodes of The Strain for its first season which will air Sunday nights at 10 PM ET/PT.

Featurette: The Strain – Inside the Strain: The Story
http://youtu.be/vZEAblK9Qrk

Now for the particulars: The Strain is a mashup of horror tropes, with the emphasis on vampires and outbreaks; in fact, an outbreak of vampirism. But these vampires never, ever sparkle. The Strain puts the horror back into vampirism, with a much different and much more complex set of attributes than we’re used to seeing from anyone anywhere, except for maybe in a long-ago Guillermo del Toro film. Yes, that’s a hint. But there is NOTHING, seriously NOTHING physically attractive about these vampires. Just wait until you see.

Though you won’t see much of them in this first episode. Because, make no mistake, this is an opening episode; there’s nothing “stand-alone” about it. It is the setup for a story which creator del Toro and showrunner Carlton Cuse plan (if it’s renewed) will be told in its entirety in three to five seasons. Yes, they know how it ends. So withhold any criticism of things that happen that you may not immediately understand. Do not presume that what appear to be inconsistencies are anything other than little tidbits left for us to ponder, only to be addressed in later episodes. 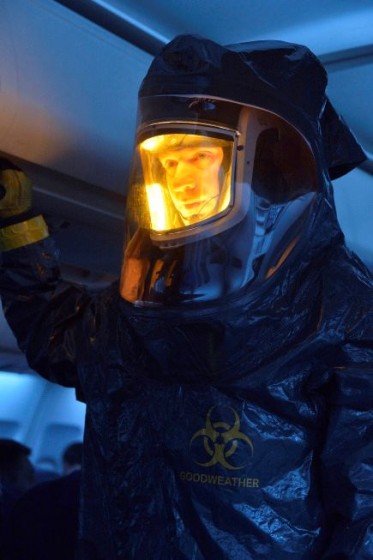 This first episode almost has a heavier emphasis on the thriller aspects than on the horror. Although it’s probably because of the setting, the episode reminds me a bit of the first, and I think the best, of the disaster films of the 1970’s, Airport. So smart, and really, so classy.

But also so scary, and so gross — in future episodes even more than in the opener — that you’ll not want to watch it at home alone in a very dark room, or while eating. Fortunately the gross scenes are carefully measured, not near-constant; closer to the first season of American Horror Story than to American Horror Story: Asylum.

Part of what keeps things moving is the fact that it’s peopled with so many interesting and varied characters, and except for one instance (two tall-ish, rather slender men of a similar age and hair color), it’s very easy to tell everyone apart, a bonus in a series with so many characters and stories. Some of the actors are quite familiar; we get Sam from Lord of the Rings, the father from Jumanji, Mikhail from Lost, Filch from Harry Potter. But don’t worry, they melt into these new roles seemingly effortlessly, thanks to their abundant skills, the excellent writing of characters whom we start caring about right from the start, and the really remarkable production values. 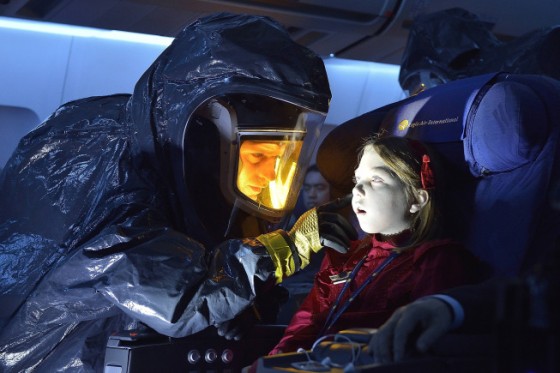 We’ve given movie-quality visuals, with colors that are completely saturated, like the best comics with the best inks, but never cartoonish. It makes the series visually mesmerizing to simply look at. And kudos to the very stingy use of music, so that when it is employed, it provides the perfect undercurrent, thanks to the excellent Ramin Djawadi (Game of Thrones, Pacific Rim). And bless ’em, they even pulled a Helix with the music in one scene. Those of you who know that series will know just what I mean, when it happens.

This review took me far longer than usual to write because every time I put the screener on after my initial watch, for inspiration, I couldn’t take my eyes off of it. I’ve probably seen it four or five times now. And every time I watch, I get more out of it. Yes, it’s one of those. You’ll want to record every episode of this series because every rewatch is fruitful, both immediately after a first watch, and after you’ve seen a few more, so that you can pick up on those tidbits they so carefully place for us.

So watch it live, record it and watch it again, then next week watch episode 2 live, then rewatch episode 1, then episode 2. Repeat in similar fashion every week, for 13 weeks. It is that good, and it is so worth it.

As if you didn’t know, I give The Strain, Season 1 Episode 1 “Night Zero,” Five Out of Five Stars.