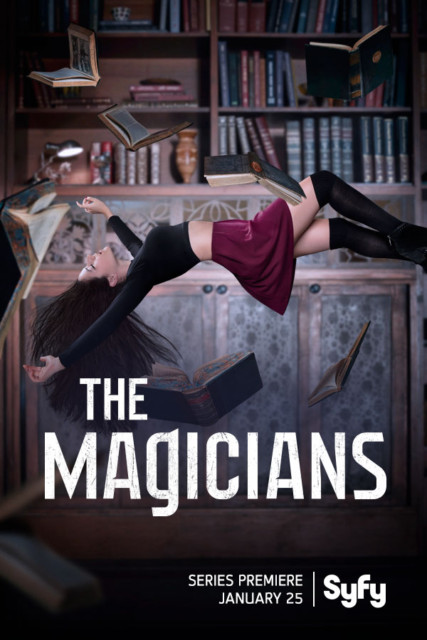 In the Season 1 cliffhanger, Quentin Coldwater’s childhood bestie Julia betrayed her friends and made a dangerous deal with The Beast that left the fate of Alice, Eliot, Margo and Penny hanging in the balance. Rest assured, they have survived…for now. When Season 2 returns, these novice magicians are immersed in the enchanted world of Fillory and thrust into an even more perilous, dark, and twisted journey to save the existence of magic.

Federal rules now call for some disclosures in reviews, so here you go. First disclosure (and the one that the feds are asking for): Syfy sent to SciFi Mafia, for free, screeners of The Magicians, Season 2, Episodes 1-4. But wait, there’s more! They sent them in an absolutely fantastic press kit. Besides the screeners and a lovely booklet with photos and character info, the kit included a high-quality The Magicians board game! It’s a drinking game! With etched shot glasses! And it perfectly captures the vibe of Season 1. Which, for me, is the point; the main reason I love the press kit is because . . .

Second disclosure: I loved Season 1 of this series. I didn’t know what to expect, because honestly, Syfy‘s original series over the years have covered the quality spectrum of 21st-century TV. But the first season of The Magicians was captivating. Alternately hilarious, disturbing, charming, magnetic, and absolutely addictive. The chemistry of and between the main characters is tangible, the production values are exceptional, and the storylines are unexpectedly twisty and fresh.

Some have called the series a Harry Potter for adults, but this isn’t just about a college for magic. It’s a grad school for magic. What that means is that the attendees are generally all old enough to legally drink and give consent, either at the same time or not. Add to that the fact that when people are in their 20s and learn that magic is real, it’s a little different from when they’re 11. Now juxtapose that hallowed-halls/frat party setting with a bit of gritty townie desperation. I’ll spoil no further if you haven’t seen Season 1, but please, see Season 1. It’s a great ride. 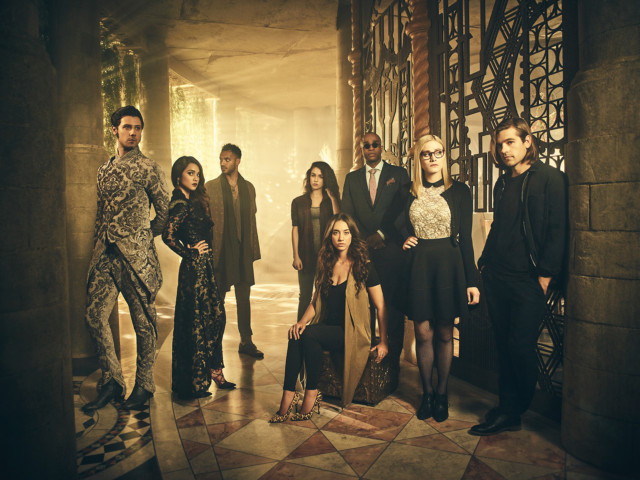 But do you need to watch Season 1 to enjoy Season 2? Because The Magicians is a serialized show, meaning the episodes build upon each other, you may feel a little lost if you enter Season 2 without at least an outline of what’s going on, especially because Season 2 takes up the moment after the end of Season 1. Happily, Syfy has provided this nice summary video, for those who have not yet partaken of the delights of Season 1 or have not recently enjoyed a (highly recommended) rewatch:

Ahhh. How I love Season 1; enough, in fact, to have purchased the season on Blu-ray (who knows how long it will remain available on Netflix?), and yes, it’s worth it. As for Season 2, after having seen the first four episodes, I can say . . .

It’s fantastic to have the ol’ gang back again, with most if not all of their chemistry intact. And there are some excellent moments–terrifying, thrilling, hilarious, charming, electric–that reach Season 1 levels. But those moments are a little more spread out, and the connective pieces sometimes just miss a half-beat of something. It’s just not quite as cohesive, not quite as, well, magical. Some of the drama is less dramatic, the urgency less urgent. I gasped far less often during the first four episodes of Season 2 than I gasped during Season 1. There are fewer big moments (though without question they still occur). There are even some unheard-of-in-Season-1 slow scenes. It is, overall, slightly less satisfying. But let me quickly add that every episode does indeed still leave me clamoring for more, and none more than Episode 4.

Of course it’s always hard for series of any kind to follow up a fantastic rookie offering with something of equal or even better quality. Maybe this series is like other fantasy trilogies (naming no names) that start out with a beloved first part, only to be followed by a somewhat less satisfying and slightly grueling but absolutely necessary middle part, that moves the story along to its epic conclusion in Part 3.

None of this is meant to be a suggestion to skip Season 2; it’s simply a warning that you shouldn’t go into it expecting quite the same level of engagement. Happily, you will still get Quentin, Alice, Eliot, Margo, Penny, Julia, Fillory, and Brakebills, and with any luck, the remainder of Season 2 will reach those lofty Season 1 standards beginning with Episode 5. Even if they don’t, and especially if you’re a fan of Season 1, you’re not going to want to miss Season 2.

I give The Magicians, Season 2, Episodes 1-4, Four out of Five Stars.