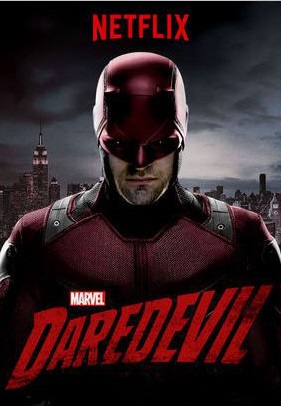 A blind lawyer, with his other senses superhumanly enhanced, fights crime in Hell’s Kitchen as a costumed superhero.

When Marvel Studios announced their partnership with Netflix with the promise of a Daredevil series I was overjoyed, but also curious. Historically speaking, Daredevil is one of Marvel Comics‘ more serious books. Its protagonist is a slightly flashier version of Batman with a penchant for dramatic flair, intimidation, and bone-crunching brawls that take place in shadowy warehouses full of goons. I was concerned about how Marvel Studios would approach the character. They have earned a reputation for “light” and “fun” stories that remain relevant and substantive. Stories injected with grand spectacle and a self-awareness that charms you into playing along with some of the more ridiculous aspects of the comic book medium. Would they abandon what has worked for them in the past in favor of a DC/Warner Bros. approach? Would they adapt the character to fit their voice? Neither of these options appealed to me, but I went in with a cautious optimism that they would find their way.

Daredevil is, hands down, one of the best superhero adaptations I’ve ever seen.

Full disclosure:  I am not a Marvel fan per-se. The Marvel titles that I have enjoyed for any length of time consists of Spider-Man and X-Men books.  I have never been a fan of Thor, Captain America, Iron Man, or Avengers. I have read Daredevil, and am familiar with the characters and storylines, but some of the minutiae escapes me. That I adore Marvel films as much as I do says a lot about their ability to tell great stories.

Tonally, Daredevil is much grittier than the Marvel Studios we’re used to, but they aren’t afraid to pull back to a place that is more familiar to us when it’s appropriate. Charlie Cox’s Matt Murdock has a lot on his plate, but he doesn’t spend every scene he’s not fighting crime brooding in the dark. He knows how to lighten up and enjoy his friends. He’s not always the most emotionally stable person, but he’s aware of that and he’s working on it. Elden Henson’s Foggy Nelson is the glue that holds Team DD. He’s loveable and funny, but capable as all hell in a crisis and not to be underestimated by lawyers or thugs in alleys.

Other cast members bring their own brand of interesting characterization to team DD. Deborah Ann Woll’s Karen Page transitions from a victim to a strong, driven woman seeking justice in her adopted city. She exhibits a naïveté that is frustrating at times, but a flawed tenacity that drives Matt and Foggy on. And holy crap Vondie Curtis-Hall owns reporter Ben Urich. By the end of his first scene I was man-crushing so damn hard.

Netflix Original Programming gets to walk in that same garden as cable network shows like Game of Thrones, Dexter, and Weeds. Unhampered by censorship and the dreaded Sword of Damocles that is cancellation looming over their heads, show runners can focus on telling the best stories possible in however many episodes they’ve been given in a season. There is a confidence in the pacing, in how the story unfolds that reminds us that great storytelling is often a marathon and not a 100 meter dash.

Daredevil takes this philosophy even further. It would have been easy for Marvel Studios to rush to the juicy bits of an official costume and an epic showdown between The Kingpin and Daredevil, but they didn’t do that. Matt Murdock spends nearly the entire series running around in black tactical gear, getting as good as he gives, and figuring out who he is and what he stands for before becoming Daredevil. Vincent D’Onofrio’s Wilson Fisk starts out as this socially awkward, psychopathic man-child that painstakingly blossoms into the man who will one day become the Kingpin of Crime. The show took a big gamble here in giving us something other than we expected; Daredevil could have been sluggish–or worse downright boring–but an ensemble cast that utterly destroys with compelling relationships and plot twists that encourage binge watching, Daredevil isn’t slow at all. It takes its sweet time exploring all the nooks and crannies of this setting and these people without losing you. This is pacing executing to the finest degree.

The show also pays its due to the Marvel Cinematic Universe mantra of “It’s All Connected” referencing characters and events from Avengers, and even taking an episode to lay some pipe for the upcoming Netflix tie-ins Iron Fist, Luke Cage, and Jessica Jones that will culminate in a Defenders crossover (think Avengers on a smaller scale). These are largely unobtrusive, and just serve as gentle reminders that these big events and personalities are effecting the world on a much smaller, localized scale.

If you don’t have a Netflix streaming account, pony up the $7.99 for a month and watch Daredevil. It’s worth it. If you have no exposure to the character (or if your only exposure is Ben Affleck in red leather) you’ll fit right in with long-time fans of the comic.