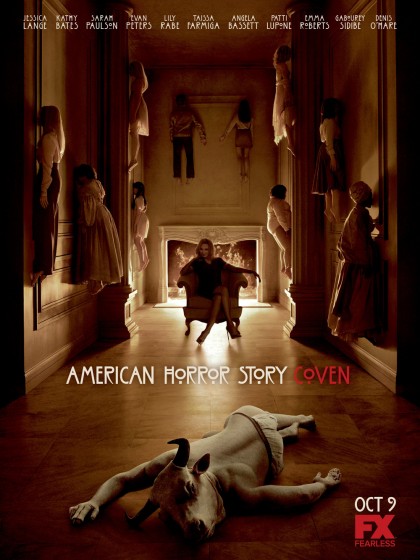 American Horror Story: Coven tells the secret history of witches and witchcraft in America. Over 300 years have passed since the turbulent days of the Salem witch trials and those who managed to escape are now facing extinction. Mysterious attacks have been escalating against their kind and young girls are being sent away to a special school in New Orleans to learn how to protect themselves. Wrapped up in the turmoil is new arrival, Zoe (Taissa Farmiga), who is harboring a terrifying secret of her own. Alarmed by the recent aggression, Fiona (Jessica Lange), the long-absent Supreme, sweeps back into town, determined to protect the Coven and hell-bent on decimating anyone who gets in her way. American Coven features an extraordinary cast including Jessica Lange, Kathy Bates, Angela Bassett, Sarah Paulson, Evan Peters, Taissa Farmiga, Emma Roberts, Gabourey Sidibe, Frances Conroy, Lily Rabe, Denis O’Hare, Patti LuPone, and Danny Huston. Ryan Murphy, Brad Falchuk, Dante Di Loreto, Tim Minear, James Wong, Jennifer Salt, and Brad Buecker are Executive Producers of American Horror Story: Coven. It is produced by Twentieth Century Fox Television.

Episode Synopsis: Cordelia’s latest vision puts the Coven’s future in question. With the end of Fiona’s reign approaching, the girls manifest powerful new gifts. Queenie’s search for Marie Laveau leads her to Hell and back. 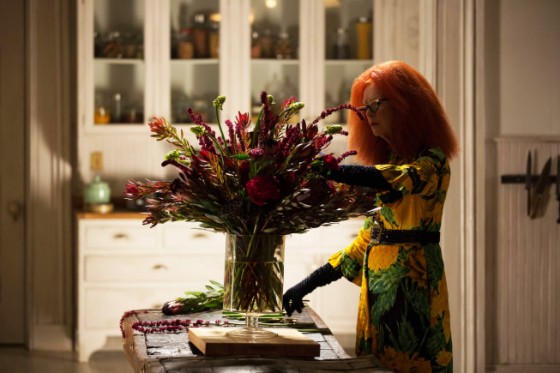 Hallelujah, our show is back. Not that inexplicable show from last week, but the real show. The great show. The smart show that is also gorgeous. I’d like to say that I have a talent for divination, but I did suspect (and hoped so hard) that last week’s unfortunate mess of an episode was an anomaly, and just like that, abracadabra, it was. Because this week, though unfortunately the penultimate episode of the Coven story, is Coven as it should be. Outrageous and excellent.

Some series save all of their big moves for the final episode of a season. American Horror Story episodes, for the most part, feature big moves every week, and this week is no exception. Big moves. Really big moves. Yet it’s also definitely a setup episode, one not to be missed, before next week’s finale.

And although there are surprises, just as (pardon the oxymoron) you’d expect, they aren’t the unreasonable or barely explained surprises of last week. These surprises are earned. The show has earned them, and we as viewers have earned them. Because this is a spoiler-free preview, I’m saving my discussion of the biggest surprise, including its location within the episode, for next week’s preview, but it does warrant discussion. Just saying.

Now to the elements beyond the storylines. All of the acting is superb as always, with of course the biggest accolades per usual to Ms. Lange. Although we don’t reach the heights of snappy dialogue that we’ve seen in one or two episodes earlier in the season, the script and its language is still definitely Coven– worthy. The camera work this week has fortunately been pulled back from last week’s upside-down-for-no-reason extremes, even though director Alfonso Gomez-Rejon has previously set the bar for Dutching the camera. And the sets, costumes, and everything else that goes into the look of the show is impeccable, as the exquisite (and only available spoiler-free) screen shot above attests.

It isn’t the best episode of Coven; for me, that award still currently belongs to “The Magical Delights of Stevie Nicks.” But I was encouraged to see that the first five minutes of “Go to Hell” this week is better than any moment of “Protect the Coven” last week, and thrilled that the level continues throughout the episode. This is more than relief, but a true appreciation of what Coven can be and once again is. Dynamic, shocking, outrageous, brutal, compelling, and satisfying. We’re riding on the steamroller to the finish now, and I can’t wait to see what gets flattened for good, or evil, next week.

I give American Horror Story: Coven, Episode 12 “Go to Hell”, Five Out of Five Stars.