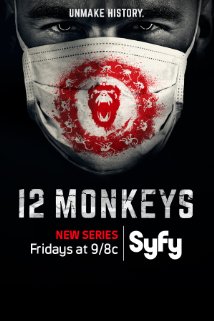 Synopsis:
Inspired by the classic blockbuster film, which commemorates its 20th anniversary next year, Syfy’s anticipated adventure thriller 12 Monkeys explores the provocative story of a time traveler from a decimated future in a high-stakes race against the clock. Utilizing a dangerous and untested method of time travel, he journeys from 2043 to the present day on a mission to locate and eradicate the source of a deadly plague that will all but annihilate the human race. The series is produced by Universal Cable Productions in association with Atlas Entertainment, producer of the original theatrical film.

In the pilot, airing January 16 at 9pm, it is 27 years after a virus wipes out most of humanity. Jones send Cole back to 2013 to stop the plague from ever happening. Following clues left in a fragmented recording, Cole tracks down a virologist named Dr. Cassandra Railly. Though she struggles to believe what he is saying is even possible, this meeting begins their fateful mission to find Leland Frost who may be linked to the source of the outbreak. 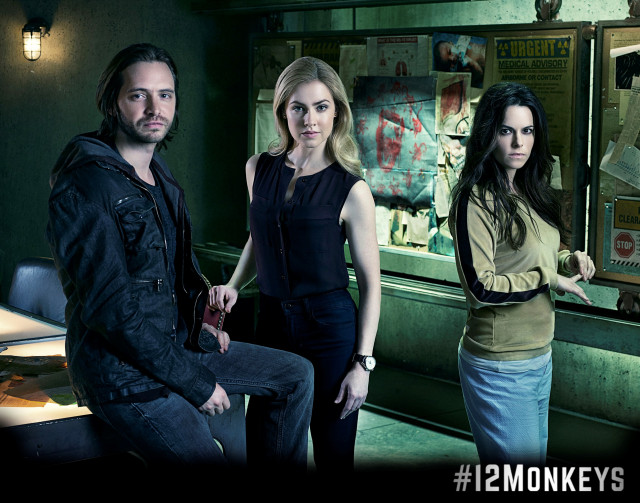 I love a good time travel story, so I’m surprised that I’ve never seen the movie upon which Syfy‘s new series 12 Monkeys is based. Of course, I haven’t been encouraged to do so over the years, as those around me have told me to not bother. Unfortunately this means I can’t tell you how much 12 Monkeys is like, or unlike, its predecessor. What I can tell you is what the people involved in the show have told me: that the series is ‘inspired by,’ but not duplicative of, the movie.

With that out of the way, is the premiere of 12 Monkeys the series a good time travel story? Why yes, yes it is. It’s a good, solid, kinda cool, slightly edgy, great jumping off point for what could very well be a really good and twisty series.

12 Monkeys addresses some of the tropes of time travel early on, in ways that I’ll not spoil. But it’s somewhat analogous to a werewolf series showing what their particular wolf form looks like, or a vampire series revealing that its vampires can, in fact, go out into the daylight. There are similar questions in any time travel series, and one or two are addressed in the premiere. Some, however, are held back, and we learn right along with the characters, creating some of the intrigue.

Beyond the tropes, however, something felt somewhat familiar about this premiere, and not in a bad way. Then it occurred to me: this series feels to me, at least in its first two episodes (yes, sorry, I’ve also seen the second), very much like Season 1 of Helix. If you watched and were a fan of that show last year, 12 Monkeys may be its successor, in a way (I am sorry to report) that the Helix Season 2 premiere completely misses.

There’s an epidemic and an evil conspiracy in each series, true, but there’s also an excitement and building sense of complexity which has hooked me in the new series the same way that last year’s new series did. I can’t wait to see where this one goes.

The two stars are familiar to many of us, as Aaron Stanford was Seymour on The CW’s Nikita, and Pyro on X-Men: The Last Stand, while Amanda Schull was Louis Litt’s most recent assistant on Suits. Emily Hampshire, whom you won’t see but for a few moments in the first episode but much more in the second (as well as in the photo above, on the right), looks somewhat distractingly like Kate Mara and a young Ally Sheedy, but was otherwise unknown to me. It’s always terrific to see Charlie from Fringe, actor Kirk Acevedo, but the most familiar face of all is that of Zeljko Ivanek. Everyone reading this review is bound to have seen him in something, as he’s been in seemingly everything I’ve watched over the past few years, from Lost to, yes, Fringe, to Revolution, True Blood, The Event, Heroes, The Bourne Legacy, and a host of other series and movies. So far I think I like him the most in this role, because for once it’s not completely. . . well, I’ll say no more.

Happily, all put in performances that help readily shed them of their previous-appearances baggage. Beyond that, the sets, sound, camera work, editing, and all else in the production serve it well; somewhat minimal, as is standard with most non-network series, but also not a distraction or detraction, either. Well done. A solid ‘B’ level series with a potential ‘A’ level trajectory. It’s the continually-in-motion storyline that has me hooked most of all. And, of course, time travel.

Definitely check out this premiere, and give the second episode a shot as well if you aren’t sure. I’ve added the series to my DVR just in case something gets in my viewing way, because I really want to see where it’s going. It’s that kind of show.

I give 12 Monkeys, “Splinter,” Four Out of Five Stars.