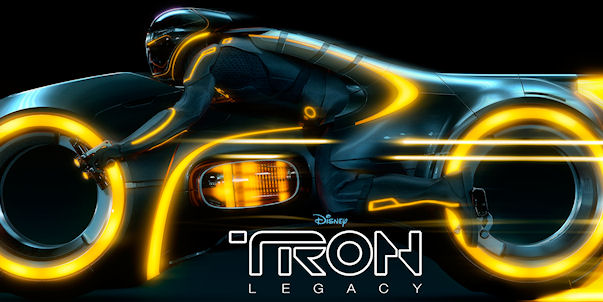 Tron Legacy director Joseph Kosinski recently sat down for an interview and shared some new details on the characters in the movie, details on IMAX, what he thinks about Legacy being the beginning of a franchise and a few words about the Daft Punk soundtrack for the film. Be sure to stick around until the end so you can check out a full, un-watermarked HUGE version of the Yellow Lightcycle poster we showed you just the other day, and you can give a listen to a supposedly leaked track from the Daft Punk soundtrack for Ton Legacy.

“We did not shoot anything with an IMAX camera, because it uses film, and since we were shooting in 3-D, we used two digital cameras. That being said, we are doing an IMAX version. What I am considering doing now is finishing four or five sections of the film in a tall format — not letterbox — and in an IMAX theater, the black bars at the top and bottom of the frame will disappear and it will become a full-screen sequence, which should be really cool. I think IMAX will be the way to see this movie.”

“Jeff is playing two characters. He’s playing Kevin Flynn, the character from the original film, and he’s playing Clu, the avatar that Kevin Flynn created in the 1980s. I’d say he’s Clu 2. There was a Clu in the first film who looked like Jeff but was very simple in terms of his abilities. He’s very stiff. Clu 2 is a second incarnation of Kevin’s avatar. He doesn’t only look like Jeff, but he can think like him too. So it’s a whole new level of artificial intelligence.”

“Yeah. I think the world we’ve built here is big enough and has scale to support another story. As to whether that will happen, that depends on how the film is received when it comes out.”

“These guys take “Tron” very seriously. Obviously, “Tron” was a huge influence on them. It was almost like they were interviewing me to make sure that I was going to hold up to the “Tron” legacy. But the more we talked, we realized that creatively, we were totally synced up. I’ve been working on it with them for over a year and a half. I don’t know of a movie where you’re working on the soundtrack months before you start filming. The level of integration between the music and the film is incredibly strong.”

Speaking of the Daft Punk Soundtrack, there seems to be a youtube clip floating that is supposedly a leaked track with a fan-made poster. I’m not remotely calling it legit because no one has officially confirmed it but, what the heck.. check it out below anyway!