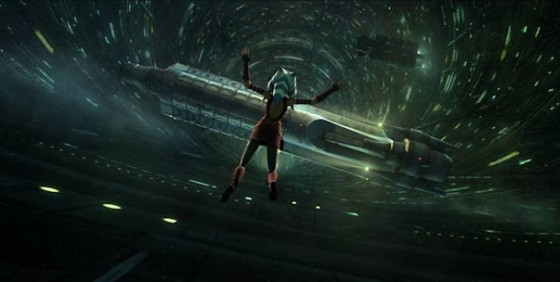 The story of Ahsoka Tano takes an unexpected, shocking turn in the epic four-part conclusion to Star Wars: The Clone Wars Season Five. In the first of this four-part episode arc, Anakin and Ahsoka are called back from the frontlines to investigate a deadly explosion at the Jedi Temple. Clues surface that a Jedi might have been responsible for the blast in “Sabotage,” Saturday, February 9th at 9:30am ET/PT on Cartoon Network.

· “I’m afraid one can become the other,” says Anakin, referring to past political idealists who have betrayed the Jedi, including Count Dooku and General Krell from Season Four. It’s ironic, given his future.

· Russo-ISC’s speech pattern, name, and habit of flipping his visor to punctuate his speech are all nods to David Caruso’s role in CSI Miami.

· In addition to an image of a crossed-out clone trooper, the Temple protestor signs said “The Jedi are corrupt,” “Stop cloning violence”