TOWER PREP Premieres Tonight: And You Thought Your School Was A Prison For Gifted Kids?

Premiering tonight on Cartoon Network, Tower Prep is a new live-action, hour-long series aimed at young adults. The show follows a group of teens with special powers held at a mysterious boarding school of an undisclosed location and agenda.

If you thought your high school experience was odd, try not remembering how you got to this prep school in the first place (and in one character’s case, not even remembering anything before arriving at said school) and being faced with nameless adult authority figures. Yes, it’s just “Head Master” or “Nurse” to these kids, but this is no Xavier’s Institute for Higher Learning.

Executive producer and writer, Paul Dini (Batman: The Brave and The Bold, Star Wars: The Clone Wars), of comics and animation cred, talks about the inspiration behind the series:

“This was an idea that always intrigued me ever since I went to boarding school some years back. I wanted to take what is essentially a very nice experience, but play it up — cartooned it, if you would — to show off all the paranoia and the angst that a kid goes through and put it more in a fantastic world.”

The students that attend Tower Prep have abilities like “preflex” to anticipate and react to things before they happen, “supersuasion” akin to the Jedi mind-trick, mimicry to mimic any action or voice, and perception to literally read people like a book… all of which could be deviously useful in high school. 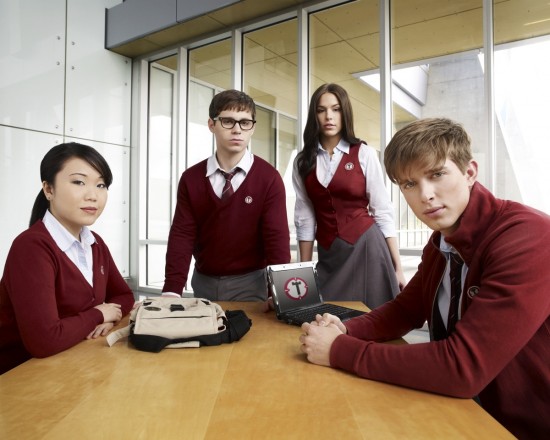 Tower Prep stars Drew Van Acker (Fortress, Castle) as Ian Archer with the “preflex” power. Ian and his classmates Gabe Forrest (Ryan Pinkston), C.J. (Elise Gatien), and Suki Sato (Dyana Liu) try to get to the bottom of this school’s mystery. Why are they here? To what end is the school training these kids with abilities? Why were C.J.’s memories wiped?

Dini answers questions with a teaser:

“The school has a benevolent purpose. Whether it remains so is one of the ongoing themes of the series. As we go along we get the idea that, for all its mysteries and all its benefits, there may be a shadowy force trying to turn the school toward something evil.”