Marvel announced that the first trailer for Guardians of the Galaxy will be shown on Jimmy Kimmel Live late Tuesday night, and we could not possibly be more thrilled. Honestly, we’d probably pop like a balloon if we were any more thrilled than we are right now. Here are three new stills from the movie to keep you just on the edge of your seat until the trailer debuts. Following that is the official word from Marvel. 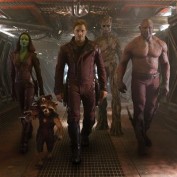 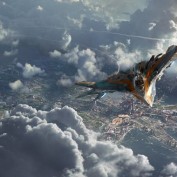 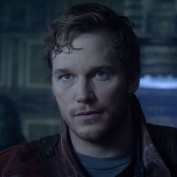 Fans eager for their first look at Marvel’s “Guardians of the Galaxy” won’t have to wait much longer, with the first official trailer for the film debuting this Tuesday, February 18 on “Jimmy Kimmel Live” at 11:35 p.m. ET!

Chris Pratt, who stars as Star-Lord in the film, will join Jimmy to give fans their first look at “Guardians of the Galaxy” before it flies into theaters later this year on August 1.

From Marvel, the studio that brought you the global blockbuster franchises of Iron Man, Thor, Captain America and The Avengers, comes a new team–the Guardians of the Galaxy. An action-packed, epic space adventure, Marvel’s “Guardians of the Galaxy” expands the Marvel Cinematic Universe into the cosmos, where brash adventurer Peter Quill finds himself the object of an unrelenting bounty hunt after stealing a mysterious orb coveted by Ronan, a powerful villain with ambitions that threaten the entire universe. To evade the ever-persistent Ronan, Quill is forced into an uneasy truce with a quartet of disparate misfits–Rocket, a gun-toting raccoon; Groot, a tree-like humanoid; the deadly and enigmatic Gamora; and the revenge-driven Drax the Destroyer. But when Quill discovers the true power of the orb and the menace it poses to the cosmos, he must do his best to rally his ragtag rivals for a last, desperate stand–with the galaxy’s fate in the balance.

James Gunn is the director of the film with Kevin Feige producing, and Louis D’Esposito, Victoria Alonso, Jeremy Latcham, Alan Fine and Stan Lee serve as executive producers. The story is by Nicole Perlman and James Gunn, with screenplay by James Gunn. Marvel’s “Guardians of the Galaxy” releases in U.S. theaters on August 1, 2014.

In addition to “Guardians of the Galaxy,” Marvel Studios will release a slate of films based on the Marvel characters including “Captain America: The Winter Soldier” on April 4, 2014; “Avengers: Age of Ultron” on May 1, 2015; and “Ant-Man” on July 17, 2015.

We’ll be sure and have that trailer up here for you as well!