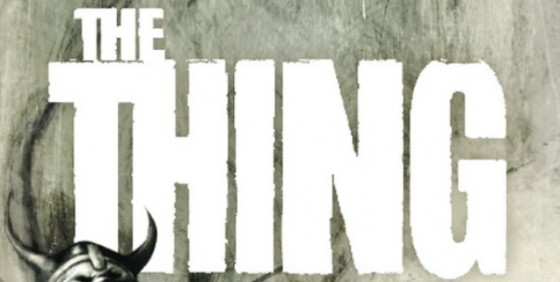 Press Release – Dark Horse Comics is pleased to announce that it has created an exclusive digital comic to serve as a prequel to the thriller “The Thing,” in theaters October 14.  Starting today, the comic will be released in three parts on September 21, September 28 and October 5 and is available FREE online atwww.digital.darkhorse.com and via the free Dark Horse Comics mobile app (http://itunes.apple.com/us/app/id415378623).  The Thing: The Northman Nightmare tells the origin story of pioneering Norsemen who discover a shape-shifting creature that is hiding in a desolate village with few human survivors. 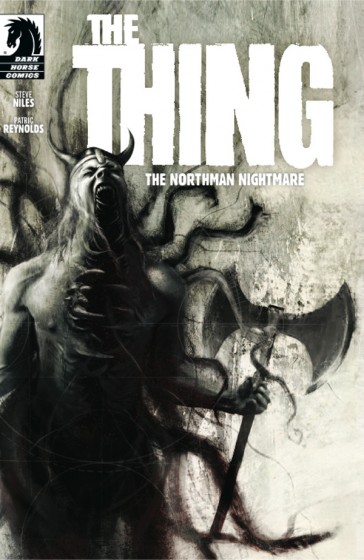 published The Thing From Another World #1.  In the style of Aliens, Predator and Terminator, Dark Horse Comics picked up where John Carpenter’s classic 1982 film left off.  Now, 20 years later, Dark Horse shares a much earlier story about this creature from beneath the ice.

Taking us into frigid Greenland, the comic introduces us to a group of Norsemen who find themselves caught in a game of survival when they discover a terrifying creature.  The shape-shifting monster has the ability to turn itself into a perfect replica of any living being.  It can look just like you or me, but inside, it remains inhuman.  And it hides somewhere in a desolate village with few human survivors, among them a strange group of women…

Said editor Scott Allie: “This property consistently generates much excitement from fans, which made it easy to round up an incredible team for this prequel comic. This is a sincere horror story by guys who know how to knock it out of the park.”

The Thing: The Northman Nightmare is written by Steve Niles (Criminal Macabre), with art by Patric Reynolds (Serenity), colors by Dave Stewart (Hellboy) and a cover by Menton3 (Silent Hill).  The Thing: The Northman Nightmare comes to readers as a prequel to Universal Pictures’ upcoming prelude to John Carpenter’s classic 1982 film of the same name.

“Steve Niles and Dark Horse have done it again, truly an amazing book,” said Menton3.  “I am extremely proud to be a small part of it.”

The first eight-page installment of The Thing: The Northman Nightmare can be downloaded digitally from the Dark Horse Digital Comics App or atwww.digital.darkhorse.com today FOR FREE!

About “The Thing” film: Antarctica: an extraordinary continent of awesome beauty.  It is also home to an isolated outpost known as Thule Station.  There, a crew of international scientists has unearthed a remarkable discovery.  But elation quickly turns to terrifying paranoia in the thriller “The Thing,” as the group of researchers encounters something inhuman that has the ability to turn itself into an exact replica of any living being.

“The Thing” serves as a prelude to John Carpenter’s classic 1982 film of the same name.  Directed by Matthijs van Heijningen, the thriller is produced by Strike Entertainment’s Marc Abraham and Eric Newman (“Dawn of the Dead”). www.thethingmovie.net