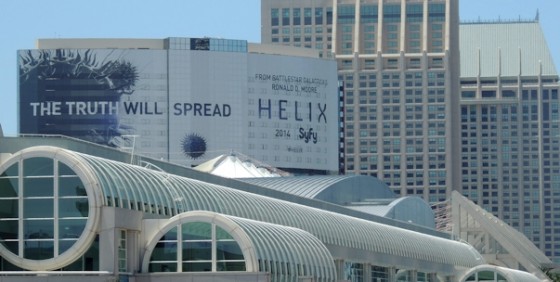 Last week was big for Syfy. The rebroadcast of Sharknado set new records, and … Comic-Con. They once again took over the cafe in the nearby Hard Rock Hotel and transformed it into “Defiance Cafe”; they had a giant Helix wrap on the nearby Marriott, and inside the con (and at a nearby venue) there were panels for September’s Season 4 of Haven, the return in 2014 of Being Human and Defiance and the final season of Warehouse 13, and the premiere of new series Helix. Whew.

Syfy has now released the “reels” (trailers) for each of those shows, and we have them here for you now. Just a few quick notes before you begin: no idea why you can hear what sounds like a laugh track during the opening scene on the Being Human trailer; Haven is the only show that has included new footage, since the other shows won’t be broadcasting for a while; and Helix isn’t set to start shooting until the end of this month, so the “trailer” has no footage from the actual show.

We did get one piece of major news about Ronald D. Moore‘s Helix just as Comic-Con was beginning; Deadline broke the news that its star had been cast, and it’s The 4400‘s and The Rocketeer‘s Billy Campbell. He’ll reportedly be playing Dr. Alan Farragut in the dark thriller series about a team of scientists investigating a possible disease outbreak. Farragut is just getting over a failed marriage and the affair his wife had with his brother, who now needs his help after becoming infected with a deadly disease.

Now, back to the trailers. Every one of the trailers is a treat to watch, especially if you’re a fan of the shows, so check them out… NOW: