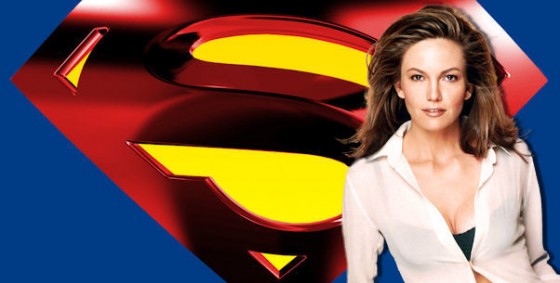 The past few weeks have been rife with casting rumors for the forthcoming Christopher Nolan (The Dark Knight Rises) produced, Zack Snyder (Sucker Punch) directed Superman reboot. The only truly confirmed castmember before this announcement was the big, blue boyscout himself, being played by Henry Cavill (Immortals, The Tudors).

Now, Warner Bros. Pictures and Legendary Pictures have announced that Diane Lane (Secretariat, Cinema Verite) has officially been cast in the film as Clark/Superman’s adoptive Earth Mother, Martha Kent. If previous reports hold up, and the deal is made, the actress will likely be starring opposite Kevin Costner (The Company Men, A Little War of Our Own) who is supposedly being eyed for the role of Jonathan Kent.

Check out the press release below for all the details.

BURBANK, CA, March 2, 2011 – Warner Bros. Pictures and Legendary Pictures announced today that Oscar®-nominated actress Diane Lane will play Martha Kent, the only mother Clark Kent has ever known, in the new Superman movie to be directed by Zack Snyder. Snyder stated, “This was a very important piece of casting for me because Martha Kent is the woman whose values helped shape the man we know as Superman. We are thrilled to have Diane in the role because she can convey the wisdom and the wonder of a woman whose son has powers beyond her imagination.”

Lane will star with Henry Cavill, who was recently announced as the new Clark Kent/Superman. Lane earned an Academy Award® nomination for her performance in the 2002 drama “Unfaithful.” She most recently starred in the family hit “Secretariat.” She next stars in the HBO feature “Cinema Verite,” opposite Tim Robbins and James Gandolfini. Lane’s long list of film credits also includes “Nights in Rodanthe,” “Hollywoodland,” “Must Love Dogs,” “Under the Tuscan Sun,” “Perfect Storm,” “My Dog Skip,” “Chaplin,” “The Cotton Club” and “A Little Romance,” to name only a portion. Charles Roven, Emma Thomas, Christopher Nolan and Deborah Snyder are the producers of the film. The screenplay is being written by David S. Goyer based on a story by Goyer and Nolan. Thomas Tull and Lloyd Phillips are serving as executive producers.

Slated for release in December 2012, the new Superman movie will be distributed worldwide by Warner Bros. Pictures, a Warner Bros. Entertainment Company.

Superman ( aka Superman: Man of Steel ) is slated to hit theaters in December of 2012.