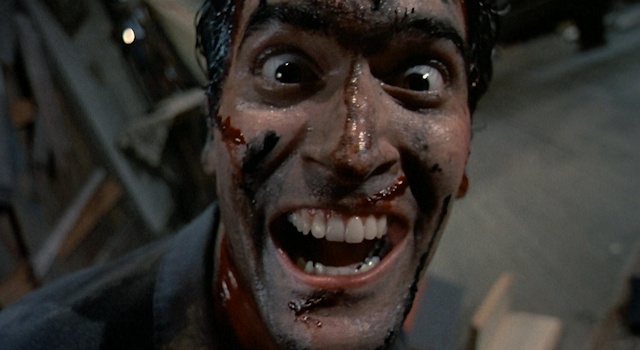 NETWORK RETEAMS SAM RAIMI, BRUCE CAMPBELL AND ROB TAPERT FOR A NEW TV SERIES BASED ON THEIR CLASSIC HORROR FILM THE EVIL DEAD

The STARZ Original series officially titled Ash Vs. Evil Dead will be 10 half-hour episodes. Bruce Campbell will be reprising his role as Ash, the stock boy, aging lothario and chainsaw-handed monster hunter who has spent the last 30 years avoiding responsibility, maturity and the terrors of the Evil Dead. When a Deadite plague threatens to destroy all of mankind, Ash is finally forced to face his demons –personal and literal. Destiny, it turns out, has no plans to release the unlikely hero from its “Evil” grip.

“Starz first worked with Sam and Rob on Spartacus, and we are thrilled to be back in business with them,” said Carmi Zlotnik, Managing Director of Starz. “With Sam writing and directing and Bruce Campbell returning to the screen, we are certain the show will give Evil Dead fans around the world the fix they’ve been craving.”

“Evil Dead has always been a blast. Bruce, Rob, and I are thrilled to have the opportunity to tell the next chapter in Ash’s lame, but heroic saga. With his chainsaw arm and his ‘boomstick,’ Ash is back to kick some monster butt. And brother, this time there’s a truckload of it,” said Sam Raimi.

“I’m really excited to bring this series to the Evil Dead fans worldwide – it’s going to be everything they have been clamoring for: serious deadite ass-kicking and plenty of outrageous humor,” said Bruce Campbell.

“STARZ has always been a great creative partner and we are excited to be working with them on this project,” said Robert Tapert.

The original Evil Dead film followed Ash and his friends who travel to a cabin in the woods, where they unknowingly release demons intent on possessing the living. The film became an international success and is critically lauded to this day as one of the best horror movies of all time. It also spawned a media franchise, including two sequels, as well as video games and comic books and a recent reboot that grossed $97 million worldwide.

Ash Vs. Evil Dead project was packaged by CAA and Craig Jacobson at Hansen, Jacobson, Teller, Hoberman, Newman, Warren, Richman, Rush & Kaller. Marta Fernandez will serve as the executive in charge at STARZ.

Starz will retain all domestic and international multiplatform rights including television, home entertainment, and digital.

Sam Raimi Bio
Sam Raimi has directed one the industry’s most successful film franchises ever—the blockbuster Spider-Man trilogy, which has grossed over $2.5 billion at the global box office.

All three films reside in the industry’s top 30 highest grossing domestic pictures of all time.

Most recently, Raimi is known for directing Oz the Great and the Powerful, starring James Franco, Mila Kunis, Michelle Williams, and Rachel Weisz. A prequel to one of Hollywood’s most beloved stories, the film grossed just under $500 million dollars globally and reinvigorated the world’s love for the L. Frank Baum series.

Preston; the western The Quick and the Dead, starring Leonardo DiCaprio, Sharon Stone, Russell Crowe and Gene Hackman; and the supernatural thriller, Drag Me to Hell, with Alison Lohman and Justin Long.

Raimi began his career in his native Michigan after directing his own Super 8 movies as a teenager. He left his studies at Michigan State University to form Renaissance Pictures with future producer Rob Tapert and their longtime friend, actor Bruce Campbell, with whom he made his very first film, Within the Woods, a short horror film they used to raise money to make a feature. That resulting horror classic, The Evil Dead (1982), financed and produced with investments from local business people and doctors, became a hit at the 1982 Cannes Film Festival and spawned a sequel, Evil Dead 2: Dead By Dawn (1987), which, like the original, showcased Raimi’s inventive, imaginative direction and offbeat humor.

Raimi next turned to the fantasy genre, writing and directing the comic book-inspired Darkman (1990), starring Liam Neeson and Frances McDormand, then followed with 1993’s Army of Darkness, a comic sword and sorcery fantasy starring Bruce Campbell.

The mid-’90s also found Raimi producing two telefilms (with friend and partner Tapert) that would become the genesis of a pair of highly popular syndicated series—“Hercules: The Legendary Journeys” (on which he served as executive producer during the program’s four-year run) and the successful companion series, “Xena: Warrior Princess” which aired from 1995-2001. His television work also includes executive producing the CBS series “American Gothic” and Starz graphic sword and sandals series, “Spartacus.”

Raimi’s work has also been a favorite on the film festival circuit, with the filmmaker winning a Best Director honor for Darkman at the 1990 Sitges-Catalonian Festival in Spain; the Critics Award for Army of Darkness at the 1992 Fantasporto Festival in Portugal; the Golden Raven, also for Army of Darkness, at the 1992 Brussels International Festival; and a Grand Prize nomination for the same title at the Avoriaz Fantastic Film Festival in France. Raimi has also won the Saturn Award twice (Spider-Man 2 and Drag Me to Hell) from the Academy of Science Fiction, Horror and Fantasy.

Rob Tapert Bio
Rob Tapert is the longstanding producing partner of acclaimed director Sam Raimi. Tapert and Raimi have been working together since they met at Michigan State University where they formed the Society for Creative Film Making. After producing the horror cult classic The Evil Dead, Tapert continued to collaborate with Raimi on Evil Dead II: Dead by Dawn, Darkman and Army of Darkness.

In 2002, Tapert and Raimi formed Ghost House Pictures with Mandate Pictures. Ghost House was conceived to produce feature films that would deliver great scares and offer horror fans a thrill ride experience. Tapert has since produced a string of #1 box office hits that started with The Grudge, which grossed $187 million world wide, and continued with Boogeyman, The Messengers, 30 Days of Night, The Possession and Evil Dead. In 2009, Tapert produced Raimi’s first directorial effort under Ghost House: the critically acclaimed Drag Me To Hell. Tapert recently produced “Spartacus” for STARZ. He’s currently producing the remake of Poltergeist for MGM and Fox 2000.

Bruce Campbell Bio
In 1979 with his Detroit friends, Sam Raimi and Rob Tapert, Campbell raised $350,000 for a low-budget film, The Evil Dead, in which he starred and co-executive produced. Completed piecemeal over four years, the film first gained notoriety in England where it became the best-selling video of 1983, beating out The Shining. After its appearance at Cannes, where Stephen King dubbed it “the most ferociously original horror film of the year,” New Line Cinema stepped forward to release The Evil Dead in the U.S.

After co-producing Crimewave, a cross-genre comedy written by Sam Raimi, Ethan and Joel Coen, Campbell moved to Los Angeles and quickly gained a foothold producing or starring in genre films such as the Maniac Cop series, Lunatics: A Love Story, Moontrap and Mindwarp, a post-apocalyptic Jeremiah Johnson, during which he met his wife-to-be, filmmaker, Ida Gearon.

Campbell then rejoined his Detroit colleagues to star and co-produce the second and third films in the The Evil Dead trilogy, completing 12 years of work on the cult favorite. This rough-and-tumble background was a plus as Campbell made his foray into television, first starring in the highly touted Fox series “The Adventures Of Brisco County Jr.,” then as a recurring guest-star on the hit show “Lois and Clark: The New Adventures of Superman.”

With these under his belt, Campbell easily made the transition to director, helming numerous episodes and recurring as the “King of Thieves” in the #1 syndicated “Hercules: The Legendary Journeys” and its follow-up phenomenon, “Xena: Warrior Princess.”

Bruce has since expanded his range on television, with appearances in Disney’s TV movies “Gold Rush,” and their update of “The Love Bug.” He teamed up with Fox again for the hit TV film “Tornado!” and starred in NBC’s top-rated “In The Line of Duty: Blaze of Glory.” Following decidedly dramatic turns on the acclaimed series “Homicide: Life on the Street” and “The X-Files,” he enjoyed a recurring role on Showtime’s edgy TV industry comedy, “Beggars and Choosers.”

At the invitation of ABC, Campbell ventured into the world of sitcoms with a recurring role on ABC’s Emmy-nominated “Ellen,” participating in one of the three touted “out” episodes.

But Campbell didn’t abandon his film roots. During that time, he had featured roles in the blockbuster Congo, John Carpenter’s Escape From LA, and the award-winning independent crime drama, Running Time. He followed these up with roles in Paramount’s romantic comedy, Serving Sara, Jim Carrey’s The Majestic, and all three of Sam Raimi’s blockbuster Spider-Man movies.

After a return to episodic television in the swashbuckling series “Jack of All Trades,” Campbell took the title role in MGM’s cult sleeper Bubba Ho-tep. His directorial debut, “Man with the Screaming Brain” premiered on the Sci Fi Channel, and Dark Horse Comics published the comic adaptation.

Campbell has since made the leap into other forms of entertainment, and is enjoying his role as an author with back-to-back New York Times bestsellers: a memoir entitled If Chins Could Kill: Confessions of a B Movie Actor, and his first novel, Make Love the Bruce Campbell Way.

In the multi-media industry, Campbell provided voices on cutting edge video games for Activision, THQ and Nova Logic – and he also enjoyed voicing characters for Disney’s animated TV series Tarzan and the Warner Brothers feature The Ant Bully. He also voiced the character of Mayor Shelbourne in the animated hit film Cloudy With a Chance of Meatballs. In 2011, Campbell voiced the role of Rod Torque Redline in Cars 2, the sequel to the smash Disney animated feature.

Most recently, Campbell directed and starred as himself in My Name is Bruce, a spoof of his B-movie career, then re-teamed with Disney for their fun-filled hit, Sky High.

In 2013, Bruce Co-Produced the hit remake of Evil Dead, joined his filmmaking pal Sam Raimi on Oz, The Great and Powerful, and completed an impressive seven-year run on spy show Burn Notice, USA’s #1 show on cable.

Campbell continues to share his acting and filmmaking experiences by lecturing at universities, including Northwestern, Carnegie Mellon and Stanford.

He currently resides with his wife, Ida Gearon, in Oregon.