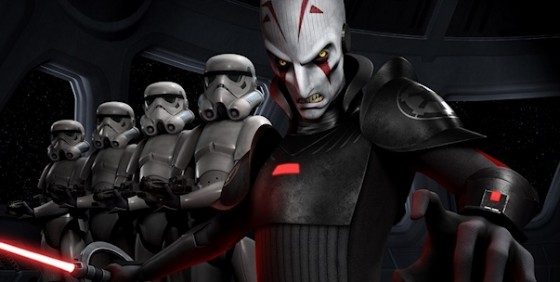 For those of you late to the Star Wars Rebels prep party, the upcoming animated series is set five years before the events of Star Wars: Episode IV A New Hope, and tells the story of the Rebellion’s beginnings while the Empire spreads tyranny through the galaxy.

We’ve been meeting the main characters through a series of featurettes released over the past months, but I admit it, the one I’ve really been waiting for is the one on the Inquisitor. We first learned of him way back in October, when we were informed by exec producer Dave Filoni that this particularly nasty bad guy has been tasked by Darth Vader to hunt down the remaining Jedi Knights.

Today in featurettes we get a much better look at him, at Imperial enforcer Agent Kallus, and at the building of an actual Chopper, the droid star of the series. For me, the best news of all about the Inquisitor is whom they’ve cast for his voice, as you’ll see in the featurette: it’s Jason Isaacs (Rosemary’s Baby, Awake, the Harry Potter movies):


And here’s another look at the trailer:

Star Wars Rebels premieres this fall as a one-hour special telecast on Disney Channel and will be followed by a series on Disney XD channels around the world.