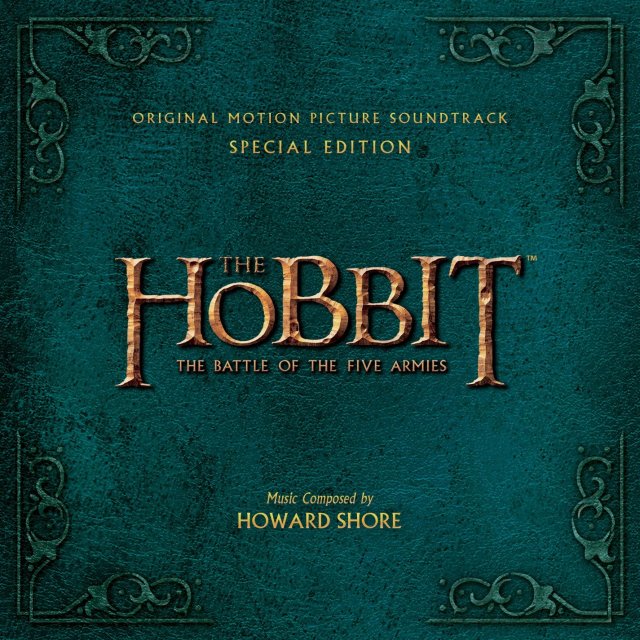 WaterTower Music has announced the release of the soundtrack to The Hobbit: The Battle Of The Five Armies, with music composed by Academy Award® winner Howard Shore, one of film music’s most respected, honored, and active composers and conductors. The soundtrack also contains an original song performed by Billy Boyd, who starred as Peregrin Took in The Lord Of The Rings Trilogy. The soundtrack will be released in two configurations: a standard 2 CD set and a Special Edition set, also with 2 CDs, and featuring extended tracks, bonus tracks, and expanded liner notes. On December 9th, both versions of the soundtrack will be available digitally and on CD, except the 2CD Special Edition, which will be available for purchase on December 16. Academy Award-winning filmmaker Peter Jackson’s The Hobbit: The Battle Of The Five Armies, a production of New Line Cinema and Metro-Goldwyn-Mayer Pictures, is the third in a trilogy of films adapting the enduringly popular masterpiece The Hobbit, by J.R.R. Tolkien. The film will be released in theaters worldwide on Wednesday, December 17, 2014, with select international territories releasing on December 10, 2014.

The Battle Of The Five Armies is Howard Shore’s final musical voyage to Middle-earth – concluding his work with director Peter Jackson on both The Lord of the Rings and The Hobbit trilogies.

As they have done previously, the good folks at WaterTower Music have released the soundtrack for The Hobbit: The Battle of the Five Armies before the movie has its official premiere here in the U.S. If you listen to this soundtrack before seeing the movie, as I did, you may think, as I did, and perhaps rightfully, that we are in for a giant heaping load of Helms Deep-level scary, horrible, depressing, really terrible and awful things to be marching in front of our eyes on the big screen for what feels like 95% of the movie. Yikes.

I’ve been lucky in that almost every soundtrack I’ve reviewed here for SciFi Mafia has been something that I would recommend listening to, even if you never saw the series or movie. While most of us purchase soundtracks because we love the visual work that they support and shape, and love the reminders that the soundtracks provide, there are some who love soundtracks on their own, for the auditory experiences, and sometimes for the sparks they can give to all sorts of imaginary adventures.

Not this time. There came a point near the end of the first of the two discs where I finally just had to pull out the earbuds; the constant and increasing dissonance started to actually hurt my ears. Soundtracks tend to exhibit a wide range of dynamics, since one, they are supporting, hopefully, a wide range of emotions and types of action, and two, they are usually orchestral and therefore take advantage of the range that a symphony orchestra can provide. It’s unfortunately too easy to miss the very quiet and subtle portions of the pieces unless you have an excellent sound system and supportive or slightly deaf roommates and neighbors, since the “loud” of the orchestra can get really really loud when you have the sound cranked to hear all the quiet bits, so I usually recommend listening to soundtracks with your earbuds. Again, not this time.

At least, not until you get halfway through the second disc. With, oddly enough, “To the Death,” track 5 of 12 on the second disc, things start to calm down, eventually. The next track, “Courage and Wisdom,” is the first truly contemplative track of the collection, followed by “The Return Journey,” which adds hints of the Shire theme, before fully returning (sorry) to all that I love about Hobbit soundtracks, in “There and Back Again,” which starts with the Shire theme and builds out from there.

Billy Boyd‘s song “The Last Goodbye,” which follows and is likely what we’ll hear as the credits begin to roll, is really quite lovely, and not whiny or smarmy at all like I honestly feared it might be. It fits in well with both all the familiar orchestral themes as well as with the end credit songs from the earlier Hobbit movies.

“Ironfoot,” track 10 of disc 2, is what I presume to be the song that follows “The Last Goodbye” over the end credits, and it may be my favorite of all. Here are my notes taken during a first listen:

Pipes! Absolutely wonderful. Triumphant but not military. 6/8, the tempo of riding, and sweeping vistas. Tin flute at near 2′. Then horns, then mens chorus, then quick dissonance, then lovely folkish violin/viola solo, then dissonance, then orchestra takes the folkish theme, then does more. Wonderful drawing together. Then battle-ish, resolving to quieter, mystical with bells and womens chorus. Not a big bang finish, but really quite perfect.

The two bonus tracks that follow are anticlimactic but notable. The second, “Thrain,” has a fair amount of that ear-hurting dissonance, but the quick pace helps it work well.

So, lovers of soundtracks for their own sake, is this for you? Arguably, yes, because tracks 5 through 10 of the second disc are worth the full price of the Special Edition. They are gorgeous, and beautifully capture the heart of the Hobbit movies.

But as I said at the start, this soundtrack is also likely a powerful reflection and support of the movie. So if you’ve seen and loved the movie, or just know in your bones that you will, you need this CD, relentless scary horrific dissonance and all.

And if you’re getting the CD, do yourself a favor and get the Special Edition. You’ll get extended versions of some tracks, plus bonus tracks, plus the really lovely booklet that includes not only some gorgeous, epic screen shots, but a letter from writer/director Peter Jackson and another in-depth scholarly (and spoilery) look at the musical themes of the soundtrack by Doug Adams.

Because I didn’t love three quarters of the soundtrack before seeing the movie, I have to take my star award down by one. I’m sure that post-movie-viewing me will completely disagree, and try in vain to add that fifth star.

I give The Hobbit: The Battle of the Five Armies Original Motion Picture Soundtrack (Special Edition) Four Out of Five Stars.

The Hobbit: The Battle of the Five Armies Original Motion Picture Soundtrack (Special Edition) is available from Amazon! Here’s a link!