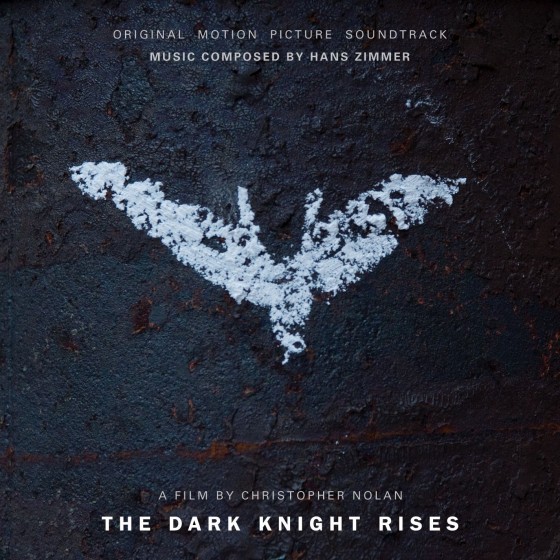 Academy- Award® winning composer Hans Zimmer teams for the fourth time with writer/director Christopher Nolan to create the music for the final installment of his Dark Knight Trilogy.

“I thought after we finished the last one [The Dark Knight], that was it,” said Zimmer. “There was nothing else we could possibly do. At the same time, when I started reading this script, I instantly knew that there was a whole world out there that I hadn’t even touched yet.”

“I have never worked with someone so dedicated to the idea that the real risk is in playing it safe,” said Nolan. “Hans taught me that you sometimes have to go in what appears to be the wrong direction to discover all the possibilities, and that without exploring those possibilities you can never do anything truly exceptional. He sets creative goals for every film that are higher than you ever thought practical…or even reachable.”

Zimmer added, “We’re comrades in arms, the way we try to cheer each other on and try to really do the best work we possibly can. And part of that is you have to be prepared to not hold back. You have to put everything into the movie.”

Hans Zimmer has scored over 100 films, grossing more than 19.6 billion dollars at the box office worldwide. He has been honored with the Academy Award®, 2 Golden Globes, 3 Grammys, an American Music Award, and a Tony Award. In 2003, ASCAP gave him the prestigious Henry Mancini award for Lifetime Achievement for his impressive and influential body of work. He also received his Star on the Hollywood Walk of Fame in December 2010. Some of his most recent works include Madagascar 3: Europe’s Most Wanted, Guy Ritchie’s Sherlock Holmes: A Game of Shadows, and Rob Marshall’s Pirates of the Caribbean: On Stranger Tides.

For better or worse, my first exposure to this gorgeous soundtrack, other than snippets in clips and trailers for the movie, did not come from the movie, but did come after the Aurora shooting. I have done my best to remove that aspect from my experience of this work, to take those particular demons out of the review equation. I have also not yet seen the movie, nor (I know, I know) have I actually sat down and watched the first two of the trilogy in their entirely, nor do I have their soundtracks with which to compare this, nor do I own any other Zimmer soundtracks. I approached this work, therefore, with a clean slate, and no preparation other than the very interesting introduction written by director Chris Nolan which is included in the CD.

This means that you do not need to be a fan of Batman, Chris Nolan, the Dark Knight trilogy, or any of Hans Zimmer’s previous works, to LOVE this soundtrack. Because I do. I love it. It’s one of the best CDs I’ve listened to all year, maybe for the past few years. I get this feeling of satisfaction, recognition, and other-worldliness listening to this soundtrack, similar to when I watch what I consider to be my very few “A” level movies and TV shows. This is the level of soundtrack that makes listening for listening’s sake an absolute joy. This is quality. It. Is. So. Good.

When you get this CD – because really, you need to get it – set up the tracks to play on continuous/gapless album, it’s how they’re meant to be played. Nearly every track runs straight into the next, like a long, lush symphony. As always with soundtracks, especially orchestral soundtracks like this one, if you don’t have an excellent audio system I recommend headphones/earbuds/direct wiring to your brain – I kid about that last one – to get the best out of the recording.

Now for some specifics. The soundtrack starts with a 37 second musical storm, meaning it literally sounds like a storm but is faintly recognizable as traditional orchestration. It’s very cool. We’re then taken into a somber calm before the storm/between the storms that builds, builds, to the third entry, when things really start moving, and they never look back. It’s fast, rhythmic, percussive, the horns sound like lightning, and we’re introduced to a 10/8 time signature accented by percussion that will recur throughout.

We get a beautiful sonorous cello near the beginning of track 4, but it moves into action fairly quickly, and we’re off. That’s one of the things I really love about this soundtrack CD. Though it occasionally dips into broad, slow, pensive sections, they do not last. Nearly all of this CD has action. I was going to write “tension” but that sounds whiny. I am absolutely delighted to report that there is nothing, anywhere in this soundtrack, that could be considered “whiny.” This soundtrack moves. Even the track titled “Despair” seems a misnomer because it doesn’t take long for it to start moving. I found myself bobbing my head to the beat, like I was listening to the fast section of Bohemian Rhapsody. I did a lot of head bobbing during my multiple playbacks of this soundtrack.

Rhythms, melodic lines, instrumentation, effects, all change throughout the next 8 tracks, and yet there is no escaping the constant driving darkness. Faster, slower, a bass line here, a quiet interplay there, but always a return to motion, either from the percussion, synthesizer, sometimes the whole rich crew. There are a few triumphant sections, but this ain’t no John Williams soundtrack;  even if you knew nothing of the movies, you could read the title of this one, The Dark Knight Rises, and know that it’s appropriate. Throughout the majority of the soundtrack, the lower orchestral voices prevail with foreboding, but always always we get a return to the driving aspect of the driving darkness.

We are given a benediction of sorts in the penultimate track, but that falls right into the hard-driving final track, which is a perfect finale, digesting everything that has come before it. There are slower, sweeping, melodic sections in the finale, but Zimmer knows exactly when we’ve had enough of that, so in comes the movement again, and it builds and builds. But—hopeful? Is that a hopeful note? then back to the constant movement, the driving darkness, then – wait, I think this time it is hope – but it stops, and leaves us with a small quiet voice. Eerie and perfect.

Okay (I sigh), there’s one tiny tiny bit I could live without – the female voice that is so reminiscent of Murray Gold’s use of the same in his Doctor Who soundtracks, and which usually irritates me there as well, but happily it only shows up once or twice and is extremely short-lived in this soundtrack. It’s hardly worth mentioning, so little did it affect my enthrallment with this CD.

Externals: My review copy is a digital download, so I can’t speak to the packaging of the hard copy CD. I did also receive, however, a download of the 7-sided folder or booklet that comes with the CD which includes not only a list of the tracks and that introduction by Chris Nolan that I mentioned above, but an impressive list of credits for the soundtrack that includes, bless ‘em, a list of the principals of the orchestra, a rarity and appreciated. There are also some promotional stills from the movie.

Have I mentioned how much I love this soundtrack? If I could give it a higher rating than our highest, I would. This moving, sweeping, driving, dense, dark, mind-grabbing, ear-filling soundtrack o’ wonder will be in constant rotation in my ears and in my head for hours to come.

I give The Dark Knight Rises: Original Motion Picture Soundtrack Five Out of Five Stars.