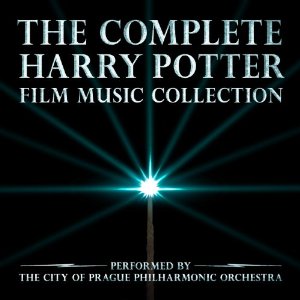 Performed by: The City of Prague Philharmonic Orchestra

In the top 20 list of the biggest ever grossing films worldwide, six are Harry Potter titles. The music for the film series has featured the work of the cream of film composers including John Williams (who received Academy Award nominations for two films in the series), Patrick Doyle, Nicholas Hooper and Alexandre Desplat. This unique collection of new recordings by The City Of Prague Philharmonic Orchestra  brings together the music from all eight films for the very first time.

Let me emphasize what is set forth above, that this is not a collection of tracks from previously released soundtracks, but rather is a new recording, both a digest and expansion of each of the themes. I own the original soundtrack for the first movie, so I did a quick comparison of the first few tracks. If you are the type of Harry Potter music fan who has every nuance of every track from the original soundtrack memorized (I am not, by the way), you will definitely realize the difference pretty quickly, even if you didn’t look at the track names, which are not always identical. It is not in any way a difference in quality; it’s a difference in the actual music as written and performed.

Here are two examples: “Harry’s Wondrous World” in this recording, listed as “Harry’s Wonderous World” in the original soundtrack, is nearly identical to the original, until the end of the track which is quite different for each. But the first track on the original soundtrack is titled “Prologue” and is only 2 minutes 13 seconds, while on this production the first track is titled “Hedwig’s Theme” and is a full 4 minutes 51 seconds long. As I said, similarities and differences.

If, however, you are a fan of the music from each of the films, you are likely to love this two-disc CD set. Grouped by movie and therefore by composer, it’s a sort of “greatest hits” of the music of the movies, as the original soundtracks from all 8 movies could hardly fit onto two discs. If you’re looking for the familiar tunes, Disc One will be your disc of choice. All written by John Williams, you’ll get all those hummable themes in quite a few iterations, as often happens in soundtrack collections. There is bombast, wonder, evil, humor, snow, clumsiness, and victory, even that wonderful song that was sung by the student choir in the early stages of the third movie, all there for your enjoyment in that one disc. Obvious winners for me beyond the familiar tracks, and that song (“Double Trouble”), include “The Knight Bus,” which sounds very appropriately like a magical whacked out crazy taxi on steroids version of American in Paris, and “Aunt Marge’s Waltz,” whose quirky oboes and flutes matched with tubby basses just made me laugh.

The second disc is a different animal, for a couple of reasons. I’m probably least fond of the music from Goblet of Fire, which was written by Patrick Doyle. The performances are perfect of course,  but it’s just a style that’s more romantic than I usually prefer, with lots and lots of sweeping strings. Lots. Still, it isn’t inappropriate, it just isn’t my, err, brew. There’s more movement and animation with Nicholas Hooper’s scores for Order of the Phoenix and Half Blood Prince, because although he also employs a slightly inordinate amount of strings, he balances it by adding in some less frequently used instruments – xylophone! timpani! snare drum! – and some syncopation that keep it from veering towards something more appropriate for Wuthering Heights. The final two tracks, however, were composed by Alexandre Desplat and are dark, brooding, and totally different from anything else on the discs; they are perfect for the last two movies, and they are captivating.

Which leads me to the only real problem I have with this package. Why oh why are we only given one track from each of the last three movies? Not only could a few of the Goblet of Fire tracks been eliminated to make room, but – and here’s the bigger questionable choice – the final track of this set, while lovely, dense, and mesmerizing, has absolutely no quality of finality to it (it wasn’t meant to), and therefore shouldn’t be the final track of an epic 8-movie series music collection. And the worst thing is, the tracks that would have been perfect for the discs’ finale are the last two tracks of the 8th original soundtrack, “Voldemort’s End” and “A New Beginning.” They are gorgeous, epic and perfect; they total fewer than five minutes between the two of them; and hello, it’s not like they had to look hard to find them. Unless there was some contractual reason for not recording the two of them, or even the last one alone, the choice made was inexplicable. I defy you to not say “wait, it’s over?” after the last track of the set. Sigh.

Taking a step back from that, however, this two-disc set is a wonderful way to whiz through the high musical points of all eight movies without sitting through all eight original soundtracks. It is truly beautifully performed and would be a terrific addition to any soundtrack collection. That I now have new respect and admiration for John Williams’ work is a lovely side benefit.

As for the physical set itself, it comes in a standard clear case with a swing tray. The front title is made of a booklet insert that is really informative, with three two-page write-ups inside: one about the books, one about the movies, and one about the composers, the latter being the most interesting. The back insert lists each of the tracks on the outside, so you can easily see the breakdown of tracks/movies/composers. Not a super-special package, but a step up from basic.

Here are the tracks:

HARRY POTTER AND THE SORCEROR’S STONE

HARRY POTTER AND THE CHAMBER OF SECRETS

7. The Chamber of Secrets

10. Cakes for Crabbe and Goyle

HARRY POTTER AND THE PRISONER OF AZKABAN

17. Mischief Managed/ A Window to the Past / Buckbeak’s Flight

HARRY POTTER AND THE GOBLET OF FIRE

HARRY POTTER AND THE ORDER OF THE PHOENIX

10. A Journey To Hogwarts / Fireworks

13. Flight of the Order of the Phoenix

14. Loved Ones and Leaving

HARRY POTTER AND THE HALF BLOOD PRINCE

This is a great set and a must-have for any fan of the Harry Potter movies, John Williams, and lovely and varied symphonic performances.

I give The Complete Harry Potter Film Music Collection Four Out of Five Stars.