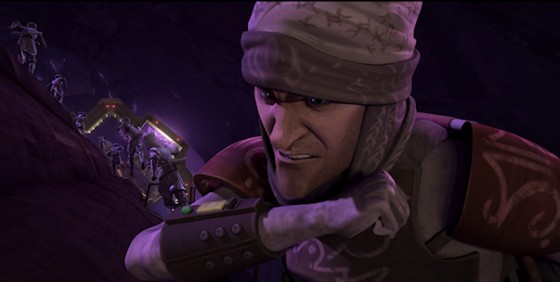 They’ve cast some great guest voices on this season’s Star Wars: The Clone Wars; we’ve already had Katee Sackoff and we know that Sam Witwer is on his way (again), but tonight we get the excellent surprise voice stylings of the beloved Simon Pegg! Also known as Shaun of the Dead, Scotty in Star Trek and the upcoming Untitled Star Trek Sequel, and much more, but tonight he will be known as “Dengar”:

This week, in “Bounty,” an aimless Asajj Ventress joins a team of bounty hunters under the leadership of young Boba Fett. On an alien world, they undertake a dangerous but profitable mission that tests the limits of their skills, and the strength of Asajj’s character.

Dengar – one of the bounty hunters seen in the company of Boba Fett in The Empire Strikes Back – is coming to The Clone Wars, and actor Simon Pegg (Star Trek and Shaun of the Dead) is playing him in this week’s episode.