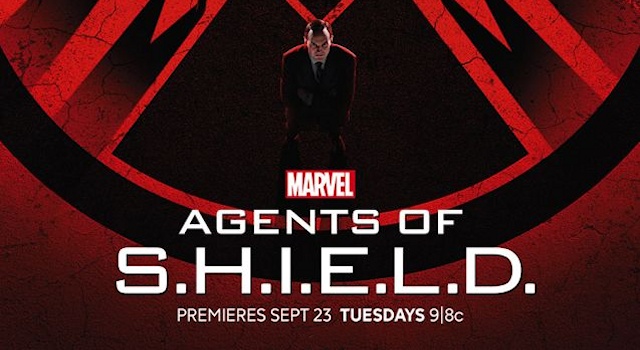 During this week packed full of season and series premieres, the Season 2 premiere of Marvel’s Agents of S.H.I.E.L.D. is one of those that vies for top of my list. Once things took a turn towards the end of Season 1 with the events of Captain America: The Winter Soldier, everything changed for the gang on the bus, including Agent Coulson’s status, and I can’t wait to see how things progress.

Take a look at the cool new poster, followed by a clip from the premiere, and a great Marvel.com interview with the new Director of S.H.I.E.L.D.: 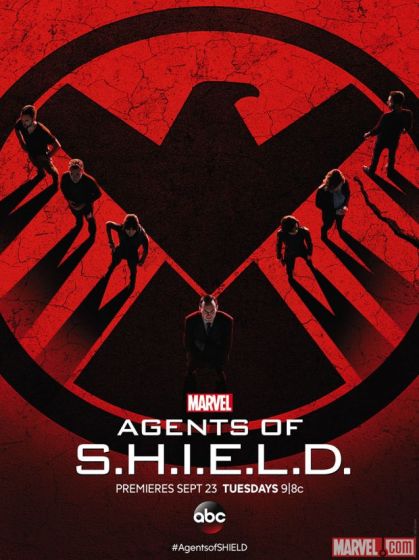 
While the second season of “Marvel’s Agents of S.H.I.E.L.D.” will bring greater challenges to all our favorite heroes, the new year will probably challenge Coulson the most as he steps up from being your (above) average Agent to the full-on Director of S.H.I.E.L.D.

Charged with rebuilding the organization last season after Hydra revealed its presence throughout S.H.I.E.L.D., effectively destroying it from within, Coulson now sets out to recruit the men and women still loyal to the ideal S.H.I.E.L.D. embodies.

Actor Clark Gregg weighed in on Coulson’s new mission before the second season premiere of “Marvel’s Agents of S.H.I.E.L.D.” this Tuesday at its new time, 9:00 p.m. ET. So read on to hear Gregg’s thoughts on the new Director’s responsibilities, how Coulson will acclimate and more!

Marvel.com: How has Coulson taken to his new job as Director instead of just simply an agent?
Clark Gregg: It’s tricky. He kind of got his dream job that I don’t even think he would have ever dreamed he would be given. [But] he’s been given this job at a time when the job itself [is] kind of “President of Nothing” because S.H.I.E.L.D. doesn’t exist. In fact, it’s worse than that. They’re [a] hunted, illegal organization that the U.S. military has kind of chosen to cast the doubt of the world on [because of] the betrayal of Hydra. [They] blur the lines between S.H.I.E.L.D. and Hydra and hunt them all down. So he has to rebuild S.H.I.E.L.D. bigger and better than before, and he has to do it at a time when they’re completely hunted with few resources. Yet his team who were quite green [came out of it] battle-hardened. One soldier turned out to be kind of rotten, [but] some of the other soldiers turned out to be very tough. He’s got a lot on his plate and he’s got to find a lot more soldiers quickly, which explains some of our amazing new cast members. Unfortunately I think he also has to contend with the fact that killing Alexander Pierce did very little to take out the top tier of Hydra.

Marvel.com: Director Fury was obviously a much brasher, more pragmatic man than Coulson can be, and Coulson can be much more of an idealist. I was curious how you saw their two leadership styles as different, and how S.H.I.E.L.D. can be different under Coulson?

Clark Gregg: I think you put it really well. Coulson can’t quite rock the leather trenchcoat or the eye patch. He’s still going to go with his tailored suit of armor. As he was exploring all the lies behind how he’d been brought back and what he’d been doing all his life, working for a company that would keep all these secrets from him, he got a little touchy-feely, whereas he hadn’t been before. The main thing is doing this job the way he can do it best seems like it’s going to require him to move a little bit in the direction of a more pragmatic figure like Nick Fury, while keeping the parts of himself that differentiate him. I guess you could say he’s got a little bit more of an idealistic, big hearted side of him, some of which is going to be extinguished by the hard decisions he has to make, I would imagine. [But] some of it he’ll need to hold on to. It’s the style that differentiates him.

Marvel.com: What about the way in which his relationship with his original team has changed? Now that he’s Director, does that shift some of those dynamics?

Clark Gregg: It does. There’s a way he can afford an intimacy with all of them when they’re part of a small, elite squad on the Bus. It’s different than what’s possible for him as Director of S.H.I.E.L.D. It’s just a different position he has to maintain, and there are secrets he must keep. I think that takes a toll on some of his relationships, at least out of the gate.

Marvel.com: One of his strongest bonds seems to be with May. What is it in her that Coulson sees that allows him to trust and confide with her?

Clark Gregg: She’s the one person who knows what’s going on with him and his secret.

Clark Gregg: I found a recurring theme last year where he was challenged to really keep the faith in the people he believed in. That really paid off for him. It paid off in spades with Skye, who everyone had doubts about, [but who] was the person who rescued him in “The Magical Place.” I also know he got his heart broken a little bit by Ward. I feel like every time you think you really understand how deep the seductive power of evil is, it always proves to be one step deeper than you thought possible. I think he’s really having his idealism challenged at this point, I would be surprised if that isn’t something [the writers] explore quite a bit.

Marvel.com: Now that you’ve mentioned Skye in particular, they clearly had a very strong bond in the first season, and now they have an even stronger bond going into the second season because they both have GH-325 inside them. Does that place them in a position where he trusts her more than some of the other team members?
Clark Gregg: At a certain point he’s going to have to bring Skye in on that. He feels protective of her, and at the same time he can’t protect her the way he might protect a daughter. He is committed to the cause they both fight for so in a lot of ways, yes, she’s as close to him as anybody, including Agent May. That said, they’re in the trenches and nobody’s safe, and that’s kind of presented a whole different level of challenges for him and their relationship.

Marvel.com: Now that you’ve had the chance to play this character for several years, what are some of the things you’re interested in exploring in this character in the second season?

Clark Gregg: Such good questions, I must say. In a way by being so front and center in “Marvel’s Agents of S.H.I.E.L.D.” in a way that he wasn’t as much in the films, [Coulson] moved in a non super-powered way into a position that a lot of the super heroes are in, which is he’s gotten some power. He’s at the front lines, and what is the cost of that going to be? Digging into that idea, he’s going to have to make some very difficult decisions. He’s going to have to send people into missions that they may not come back from, or be injured in, and he knows first hand what those costs are. I’m excited to explore what that’s really like to be the one making the calls. Not just being the good soldier, but being a good leader who doesn’t just make decisions all from his heart. Some of them have to be made with cold calculation.

Let’s take a look at one more new Season 2 TV spot, followed by one more look at the synopsis heading in to the new season:


Marvel’s Agents of S.H.I.E.L.D. returns for a dynamic, action-packed second season, with newly appointed Director Phil Coulson (Clark Gregg) – now the keeper of the secrets — charged with rebuilding and restoring government and public trust in S.H.I.E.L.D. in the wake of the events of Marvel’s Captain America: The Winter Soldier, where it was revealed evil Hydra agents had infiltrated the organization.

Ever since the existence of super heroes and aliens became public knowledge after the Battle of New York, the world has been trying to come to grips with this new reality. Agent Phil Coulson, who had died at the hands of Loki during the battle, was resuscitated and brought back into action, assembling a small, highly select group of Agents from the worldwide law-enforcement organization known as S.H.I.E.L.D. (Strategic Homeland Intervention Enforcement and Logistics Division). S.H.I.E.L.D.’s mission: to protect those who cannot protect themselves from threats they cannot conceive.

But the biggest threat was growing from within, as S.H.I.E.L.D.’s old enemy, Hydra – a dangerous extremist group Captain America fought against in World War II – had secretly infiltrated and infected the organization at the highest levels. Once revealed to the public, S.H.I.E.L.D., including Coulson and his team, was discredited and made to look like the enemy. The world now views S.H.I.E.L.D. as untrustworthy, and it’s Coulson’s job to change that opinion.

After helping to thwart Hydra, Coulson was appointed as Director and tasked with rebuilding the agency. This won’t be an easy job to accomplish with the majority of S.H.I.E.L.D. agents either killed, secretly working for Hydra or free agents. Agent Melinda May (Ming-Na Wen), expert pilot, martial artist and longtime friend, will continue to look after Coulson in the wake of the mysterious etchings he’s been carving into walls. What do these etchings mean, and can Coulson be trusted? Grant Ward (Brett Dalton), highly trained in combat and espionage, was found to be a Hydra mole and a traitor to S.H.I.E.L.D. and locked up away from the world and his former teammates. But this isn’t the last we’ve seen of him… After being left to die in the middle of the ocean by Ward, Agent Leo Fitz (Iain De Caestecker), brilliant engineer, and Agent Jemma Simmons (Elizabeth Henstridge), genius bio-chemist, found a way to escape their watery grave. But all did not go well for Fitz, who was left in a coma and may never regain his full cognitive functions; a devastating blow to Simmons. And computer hacker Skye (Chloe Bennet), now a full-fledged S.H.I.E.L.D. agent, discovered her origins as a 0-8-4 — an object of unknown origin – and that her parents were considered “monsters.” Could Skye have darkness lying dormant inside of her? Also joining Coulson’s core team is Lance Hunter (Nick Blood), a dashing mercenary sharp shooter with a quick wit. Since he didn’t rise up through the ranks, does he have an ulterior motive for helping out the team?

Who can Coulson trust?