SciFi Mafia Talks #GamerGate on OUT OF THE GAME: FANBOYS LAMENT 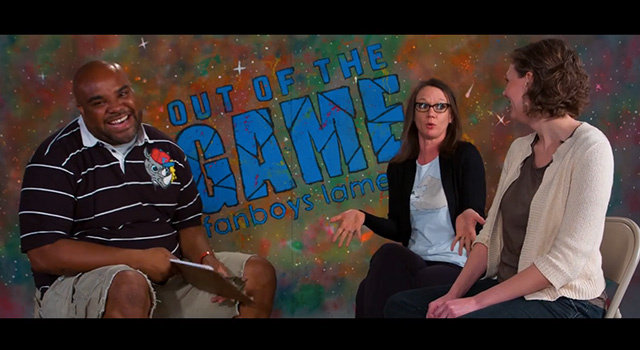 We were super excited to feature the web series Out of the Game: Fanboys Lament back in our Web Series Wednesday posts. They continue to to bring all things geektastic with games, comics, movies and more. Luckily they just so happen to film their show locally (to SciFi Mafia‘s Jess) and asked if SFM could provide a guest host to weigh in on the #GamerGate/#NotYourShield controversy and then segue that conversation into a brief discussion on female representation in Super Hero movie marketing.

Before we get to the video let me say that the #GamerGate/#NotYourShield discussion is much bigger than a 15 minute video blog or a single blog post on SFM. If you need some background you can get that here. And if you need a link to the videos by Anita Sarkeesian you can see those here. Commentary after the vid.

While I don’t think that games need to be sanitized or realistic I find that the degree of violence in the games mentioned in Anita Sarkeesian‘s videos on Feminist Frequency disturbing. I don’t play those games because of the violence, but I had no real idea how violent they were until I had seen the videos. She takes the scenes out of context, yes, but it’s not the context in question, just the acts of violence alone.

I might also mention that I don’t even care about who Anita Sarkeesian is as a person or a journalist. Any argument about her character is completely invalid to me in watching her videos. I could see these clips fed to me with no editorial comment at all and I would draw the same conclusions. I find the information I draw from her videos invaluable to me as a mother to young children with they-couldn’t-fight-it-if-they-wanted-to geek tendencies that could in the future include gaming.

As far as the marketing of female Super Hero toys, I find the real world infuriating. My Facebook and news feeds are brimming with stories of LEGO gender and Barbie woes. My girls love nerdy stuff because it’s fun and cool, and their nerdy merchandise options are slim. This is not what I want for my girls. There are strong female characters in movies–Gamora (Guardians of the Galaxy), Black Widow (Avengers), Storm (X-Men), and soon to be Wonder Woman, Captain Marvel, and Scarlet Witch (Avengers: Age of Ultron)–and I cannot buy decent products for them. They just aren’t available. And it boggles my mind that a racoon can be marketable, but Gamora can’t. I don’t have the market research in my hand proving that female Super Heroes don’t sell, but I do know that the three times I’ve checked my local super store for these ladies I’ve been prepared to buy and left empty handed.

And while She-Thor might seem like Marvel is throwing us ladies a bone, I’m not interested. I don’t need to throw my support behind a female character who is riding on the coattails of the successful man hero who paved the way for her. To be perfectly honest, I’ve never been especially interested in She-Hulk or Supergirl for that same reason. There are amazing ladies of awesome out there. Let’s keep finding new ways to make them better, or if we need a new lady, then just make her new.

Please don’t read me as man-hating. I’ve actually never batted an eye when buying Spider-Man, Super-Man, Buzz Lightyear costumes in boys sizes and fits for all my kids (boys and girls) to share. It never occurred to me to even look for a girl version (don’t even get me started on those). It just seems that as we march into 2015 we should be further along in what we want as women and what we want for the little women we’re raising, and I for one, would rather see little girls playing with Gamora or Wonder Woman dolls rather than Monster High dolls. 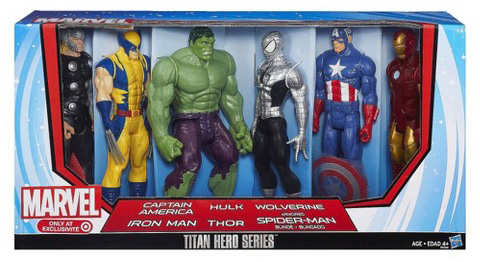 In the effort to be a responsible journalist, the “Avengers Set” that I talked about in the video, wasn’t that at all. It is the Marvel Titan Hero Series and contains a Wolverine, not a second Spider-Man as I had mentioned. I hope this doesn’t qualify me for a public stoning, but honestly some of the madness that is coming out of this controversy is just that bizarre.