Are you ready for this summer’s dose of Sci-Fi for your television palate?


Strap into your fave armchair ‘cuz between SYFY (re-branding of SciFi network) and BBC America, we’re in for a ride this July. Here’s a look at their July premieres. Check it:

(Please note that these are air dates for the US.)

Can’t remember what happened last season or don’t recall what this new show is about? Read on for short summaries: 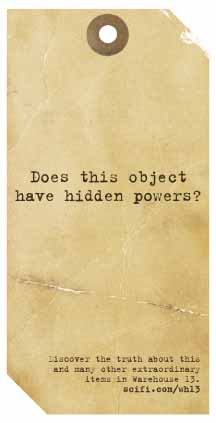 Tagline: “The unknown has an address”

Track down mysterious artifacts with Pete & Myka, two top government agents in the employ of the government’s most secretive facility, Warehouse 13.

If you live in Brookyln or L.A., you might have come across their viral marketing in the form of mysterious tags like this (pictured right) on items in flea markets.

Season 3.5. Here’s a recap of season 3’s first 8 eps: Allison does not marry Dr. Stark, as he is KIA saving the world, but she finds out that she is pregnant with Stark’s child. Carter is relieved from his Sheriff’s position when he doesn’t turn in Eva Thorne.

Torchwood: Children of the Earth

Watch for this curveball! This third season holds only 5 eps and they will air on consecutive nights beginning July 20. Day one, all the children of the earth stop in their tracks, go blank, and then scream. What, are the Jonas Brothers in town? No, but the remaining members of Torchwood, Captain Jack Harkness, Gwen Cooper, and Ianto Jones will battle the alien threat pulling the children’s strings. Also broadcast in HD.

A vampire, a werewolf, and a ghost walk into a bar… no, I mean they are roommates! Find out what happens when they try to live a normal life together. There are 6 eps in this first season and a second is already ordered. Broadcast in HD.

Doctor Who: Planet of the Dead

These are the last four eps of with the David Tennant Dr. Who. Our good doctor crash lands in a bus through a worm hole with a load of other humans onto a strange sand planet… that of course surprises them with a deadly Swarm heading their way. The companion for this trip? A ‘mysterious Lady Christina de Souza’, played by Michelle Ryan (Bionic Woman). Broadcast in HD.

Come back to our Forum after these airings to talk about these shows! We’ll be seeing you there!