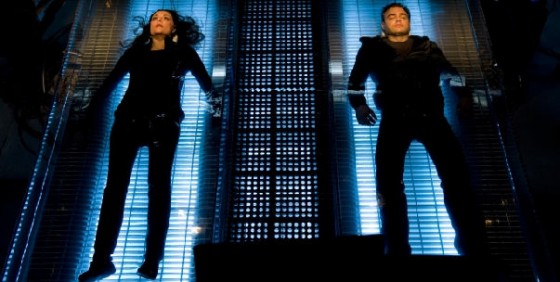 Sanctuary is now in its third season and has taken many twists and turns along the way. The first season was about our heroes’ efforts to find, capture or save, and protect “abnormals” – beings of all types which are outside the realm of, well, “normals.” For example, one of the main characters is nicknamed “Big Foot” or “Biggie” for short, because that’s pretty much who he is. The second season continued with the abnormals but expanded to deal with the fight against another group who wanted to either wipe out abnormals or use them for their own benefit.

This third season has taken yet another tack. We have seen some cool abnormal-centric episodes, but the last couple of episodes have moved far beyond the boundaries of their charter and have had little to do with abnormals, and the previews for the next episode look to be more of the same. On the other hand, it looks really cool! “Which is the true reality” is always a great basis for a sci-fi episode. And I love the little blurb they put under one of the videos: “Magnus and Will wake to find themselves in a strange and frightening world: the suburbs.” Take a look:

Oooo! So, will there be abnormal involvement? Do we care, as long as it’s a cool episode?