Rumor Has It! (Again) Zack Snyder’s MAN OF STEEL to Battle Metallo

Last spring, we brought you a rumor about the last son of Krypton taking on the villainous Metallo in director Zack Snyder‘s forthcoming Superman reboot, Man of Steel starring Henry Cavill in the titular role.

Now, we have a new rumor about Metallo being in the film, posted by the fine folks over at Superman SuperSite. Their report states:

“According to a recent update on IMDB, it may be none other than the villian Metallo.

In the IMDB full-cast listing for “Man of Steel”, former “Battlestar Galactica” star Tahmoh Penikett was originally listed as playing a character in the Zack Synder Superman reboot by the name of Emerson. That has now been updated to show that Penikett is actually playing a character named Henry Ackerdson.

What is interesting about the Ackerdson character is that he was previously featured, if only briefly, in the 2012 Warner Home Video animated feature-film, “Justice League: Doom.” In the film, Ackerdson is shown as a recently fired White House journalist who is about to commit suicide by jumping off the roof of the Daily Planet building. When Superman arrives to talk him out of it, Ackerdson reveals himself to actually be Metallo in disguise who promptly shoots the Man of Steel with a Kryptonite bullet.”

They surmise that pictures from the set [below] of Faora (Antje Traue), which we brought you last year that included a man in a mo-cap suit, may have actually been for a CGI Metallo. At the time, many people assumed it to be a stand-in for a CGI’d Zod (Michael Shannon), until they noticed the tall tracking pole mounted to the mocap actor’s headpiece, which stood 8 to 10 feet in the air. 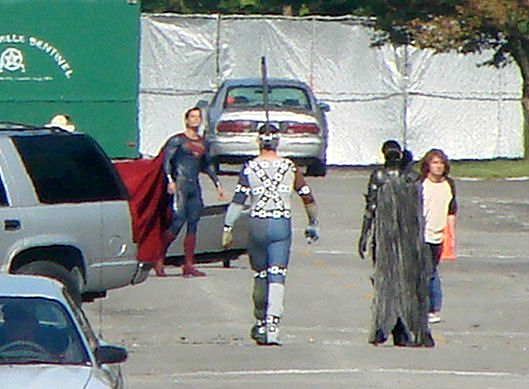 I said it back then, and I’ll say it again now. I may end up being totally wrong, but I still think it’s going to be a CGI Brainiac. What say you?