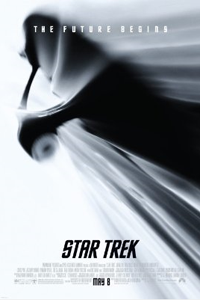 Summary: A chronicle of the early days of James T. Kirk and his fellow USS Enterprise crew members.

J. J. Abram’s Star Trek has every aspect of what it takes to be a summer blockbuster worth seeing- action-packed, solid plot line, well-timed humor, & strong characters with a side of revenge and something-to-prove. Not to mention that it is incredibly well cast, well acted, well directed, topped off with incredible CG effects!

All the characters that we know and love of Star Trek are so well cast here it’s not even funny. The spin J.J. puts on these younger versions of the characters offers a dynamic and incredibly likable edge to each of these characters.

Chris Pine, who plays our beloved Captain James Tiberius Kirk, carries the role off surprisingly well for a relatively unknown (only cred I recognized was Princess Diaries II). His execution of this version of young Kirk is like Farscape’s John Crichton & NCIS’ Anthony Dinozzo rolled into one. This young Kirk has the fearless determination, brass balls, and horn dog slant that make him Captain Kirk.

Zachary Quinto, better known as Hero’s Sylar, surprised me the most by giving us a fantastic performance as the young Spock. Kirk & Spock’s on screen presences are perfect foils for each other. This IS how the two of them would have begun their long friendship.

Eric Bana holds his own in the role of the antagonist, Nero, but I found his character to be rather one dimensional. Bad guys in action movies hardly get enough screen time in my book, but that is the traditional action movie formula. (Yes, I am classifying this as an action movie over sci-fi.)

There’s not a single person that disappoints in the main cast of characters we all know and love.  I’m just going to hit on a few outstanding performances of the supporting cast here:

– Karl Urban (best known as Eomer of Rohan from LOTR) is great as Dr. McCoy and yes, there are lines of “Damn it, I’m a doctor, not a [insert other profession here].”

– Zoe Saldana (Pirates I) as Uhura sizzles as the eye candy and love interest.

– John Cho (Harold and Kumar) as Sulu, gets to show off his close quarter combat moves.

– Simon Pegg is ever funny as Scotty. You can’t lose with Simon Pegg!

Kirk- “Who is that pointy eared bastard? (referring to Spock)”

Ultimately, I think even the best fanboys/gals will be happy with this ‘origins’ story of Star Trek. This is a giant breath of fresh air to the Star Trek franchise and would make any Trekie or newbie agree that space is indeed the final frontier.

“Star Trek” can be summed up in one word: GLORIOUS!

I give “Star Trek” Four out of Five Stars!