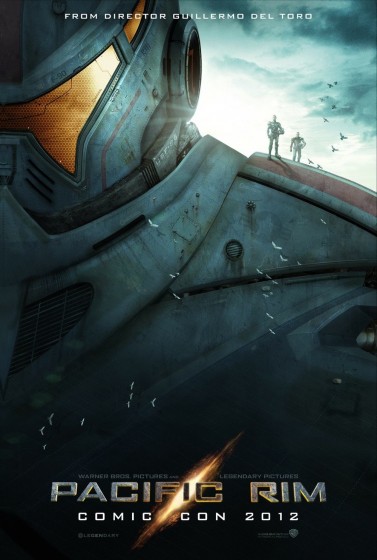 Synopsis: As a war between humankind and monstrous creatures wages on, a former pilot and a trainee are paired up to drive a seemingly obsolete special weapon in a desperate effort to save the world from the apocalypse.

Guillermo del Toro delivers an AWESOMELY fun ride with his summer blockbuster, Pacific Rim. If you’ve grown up with anime featuring mechs fighting giant monsters, you especially will have a frakkin’ blast! This helluva ride leapt from del Toro’s imagination with so much realism that you’d swear that giant robots and giant monsters were as commonplace as cell phones and bedbugs. This is MUCH more than a summer popcorn flick and that’s what I love about GDT’s strength of storytelling. 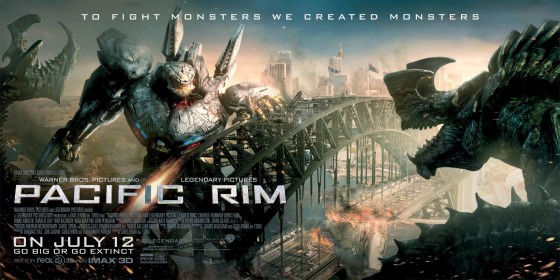 We were looking in the wrong direction for aliens to invade. It was deep within the Pacific ocean that a rift opened up between worlds and alien monsters of considerable size climbed through. The peoples of the world fought back with the creation of jaegers, giant mechs piloted by two human minds within the head of the giant robot. The storyline and how each character’s lives were affected by these Kaiju (giant monster) attacks is compelling and gives Pacific Rim the dramatic framework that sets it apart from other summer action films. 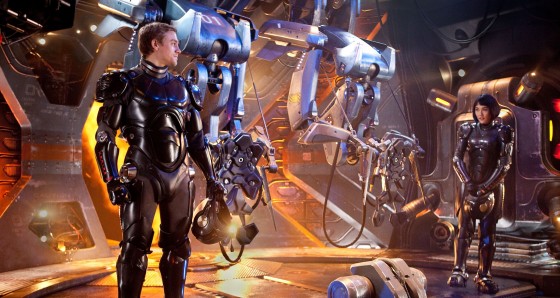 Each character is distinct and contributes to the storyline. Pacific Rim is well cast in every single role: leads Charlie Hunnam (Sons of Anarchy) and Rinko Kikuchi (47 Ronin) jive well together as the pilots of the Gipsy Danger jaeger (more to this chemistry as you’ll see when you watch it), Idris Elba (Thor) holds a formidable screen presence as military leader Pentecost, and the comic relief of Charlie Day (It’s Always Sunny) and Burn Gorman (Torchwood) as the two kaiju expert scientists gives a quirky brand of humor that balances out the dramatic notes. And of course, what GDT film could be complete without Ron Perlman? Perlman as Kaiju parts dealer, Hannibal Chau, is frakkin’ hilarious! BTW, stay till after the credits. You’re welcome. 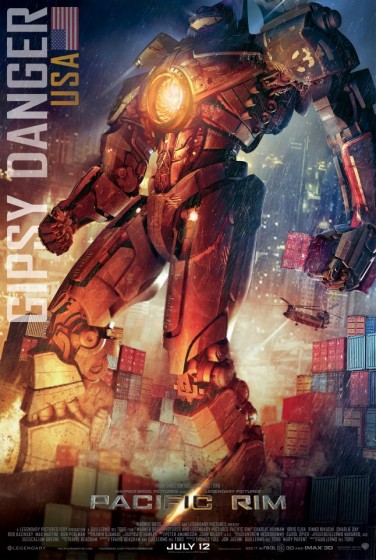 The action sequences in Pacific Rim are epic and not only stunning in scale with vast scenes of citywide destruction but very well paced which is more than I can say for Man of Steel. There were big guns, big explosions, tentacles, monster screams,… everything I hold in fond memory of anime of my childhood like Robotech and there’s a moment that screamed Voltron to me. I was so into these monster vs. mech fights that I yelled out “Tear it apart!” and “It can FLY?!?” in the theater! Hope I wasn’t too annoying to fellow movie enthusiasts but I think they’d feel the same way on opening night in 3D IMAX. Del Toro honors and modernizes the tradition of Japanese monster films and anime with Pacific Rim.

Best part about the pacing is that it’s spiced with appropriate beats for humorous moments within the action. This movie is flat out FUN. So, I bet you’re asking the two big questions: IMAX & 3D.

I give Pacific Rim Four out of Five Stars.