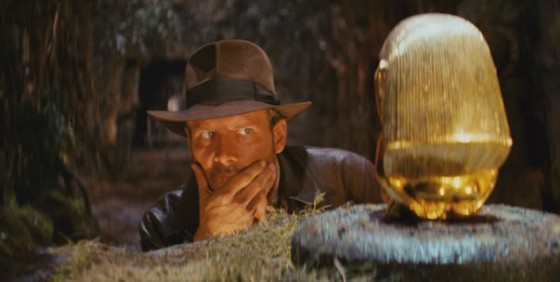 Back in June, we brought you the news when Lucasfilm and Paramount announced that they were releasing the entire remastered and restored series of Indiana Jones films on high definition Blu-ray for the very first time. Now, while you’re waiting for that to hit shelves, you can grab the family and head to your local IMAX theater and watch the film that started the whole thing, Raiders of the Lost Ark.

Check out the trailer, poster and details about the limited engagement IMAX release below! 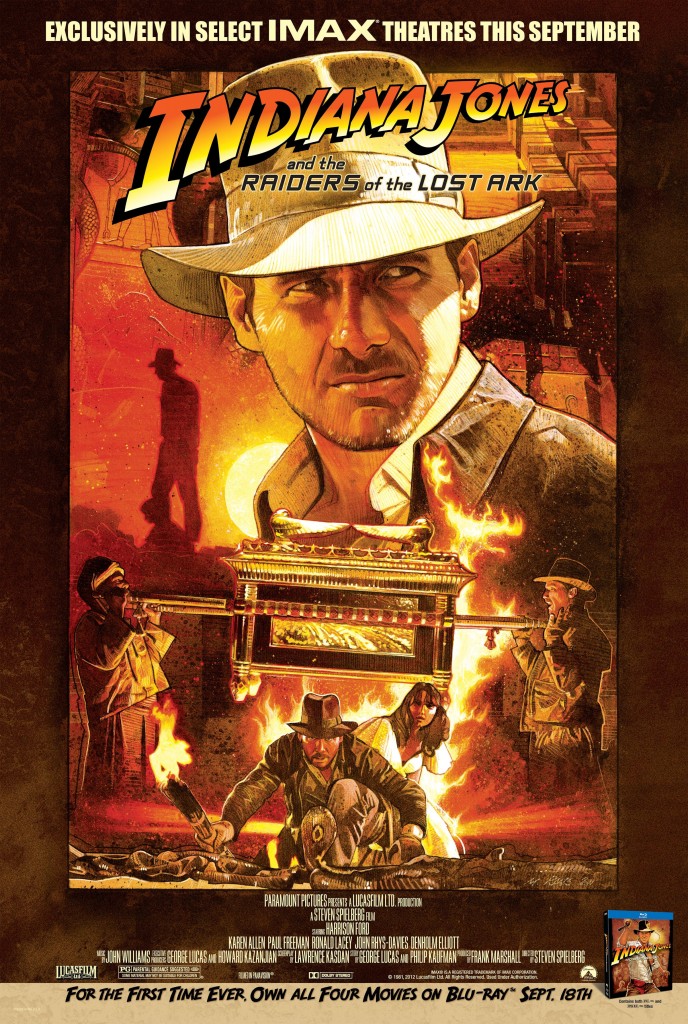 INDIANA JONES IN IMAX – FOR THE FIRST TIME EVER

RAIDERS OF THE LOST ARK™


SAN FRANCISCO, Calif. (August 15, 2012) – The cinematic classic that introduced the world to Indiana Jones is ready to embark on a new adventure when director Steven Spielberg and executive producer George Lucas’ unforgettable Raiders of the Lost Ark is released for an exclusive one-week engagement in select IMAX® theatres beginning September 7, 2012.  The film has undergone a complete restoration for the IMAX exclusive one-week release and subsequent debut on Blu-ray. Tickets and a list of participating theatres are available starting today at www.imax.com.

“When I saw the stunning quality of the picture and heard the enhanced sound in an IMAX theatre, I was quite literally blown away and hope that audiences will enjoy the experience as much as I did,” said Spielberg.

“We are honored to present all the excitement of Indiana Jones in a way it’s never been experienced before – IMAX,” said Greg Foster, Chairman & President, IMAX Filmed Entertainment.  “We look forward to celebrating this iconic film with longtime fans as well as a new generation of moviegoers.”

The IMAX release of Raiders of the Lost Ark will be digitally re-mastered into the image and sound quality of The IMAX Experience® with proprietary IMAX DMR® (Digital Re-mastering) technology. The crystal-clear images coupled with IMAX’s customized theatre geometry and powerful digital audio create a unique environment that will make audiences feel as if they are in the movie.

Under the supervision of Spielberg and renowned sound designer Ben Burtt, Raiders of the Lost Ark has been meticulously restored with careful attention to preserving the original look, sound and feel of the iconic film for its highly-anticipated release on Blu-ray as part of INDIANA JONES: The Complete Adventures.  Every extraordinary exploit of world-renowned, globetrotting hero Indiana Jones finally comes home in sparkling high definition on September 18, 2012 from Lucasfilm Ltd. and Paramount Home Media Distribution.  In addition to all of the thrilling adventures, the set features seven hours of fascinating bonus material, including a brand new two-part documentary entitled “On Set with Raiders of the Lost Ark – From Jungle to Desert and From Adventure to Legend.”  Featuring nearly an hour of rarely seen footage from the set of the film and archival interviews with Steven Spielberg, George Lucas and Harrison Ford, this captivating piece transports fans back to where the legend began.

IMAX Corporation is one of the world’s leading entertainment and technology companies, specializing in the creation and delivery of premium, awe-inspiring entertainment experiences. With a growing suite of cutting-edge motion picture and sound technologies, and a globally recognized entertainment brand, IMAX is singularly situated at the convergence of the entertainment industry, innovation and the digital media world. The industry’s top filmmakers and studios are utilizing IMAX theatres to connect with audiences in extraordinary ways, and as such, the IMAX network is among the most important and successful theatrical distribution platforms for major event films around the globe. The Company’s new digital projection and sound systems – combined with a growing blockbuster film slate – are fueling the rapid expansion of the IMAX network in established markets such as North America, Western Europe, and Japan, as well as emerging markets such as China and Russia. IMAX deliver the world’s best cinematic presentations using proprietary IMAX®, IMAX® 3D, and IMAX DMR® (Digital Re-Mastering) technologies. IMAX DMR enables virtually any motion picture to be transformed into the unparalleled image and sound quality of The IMAX Experience®.

IMAX is headquartered in New York, Toronto and Los Angeles, with offices in London, Tokyo, Shanghai and Beijing.  As of June 30, 2012, there were 663 IMAX theatres (529 commercial multiplex, 20 commercial destination and 114 institutional) in 52 countries.

IMAX®, IMAX® 3D, IMAX DMR®, Experience It In IMAX®, An IMAX 3D Experience®, The IMAX Experience® and IMAX Is Believing™ are trademarks of IMAX Corporation. More information about the Company can be found at www.imax.com. You may also connect with IMAX on Facebook (www.facebook.com/imax), Twitter (www.twitter.com/imax) and YouTube (www.youtube.com/imaxmovies).