Here’s some terrific news for all members of the Clone Club, which absolutely includes me. Instead of doing what so many others do, BBC Home Entertainment is NOT making us wait for the release of Orphan Black Season 2 on Blu-ray and DVD until right before the as-yet unannounced but surely must happen Season 3 (HEY BBC AMERICA, PLEASE GET ON THIS).

Instead, we get to watch the second outstanding season of Orphan Black on DVD and/or Blu-ray (plus bonus features!) less than a month after the finale airs. Thank you, BBC Home Entertainment!

Here are the details, including one teeny tiny hint about a scene from the finale, which is honestly not spoilery at all, so relax and enjoy all the good news, followed by a link to pre-order your copy: 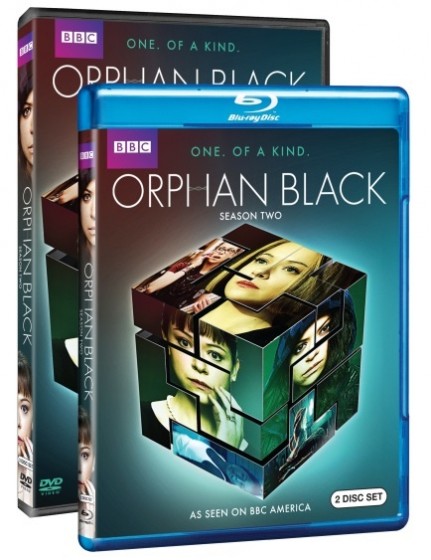 New York – June 2, 2014 – BBC AMERICA’s hit original dramatic conspiracy thriller Orphan Black: Season Two is back and cloning itself onto Blu-ray and DVD July 15, 2014. In addition to all 10 episodes from the new season, BBC Home Entertainment is giving the audience even more to explore with extra features and exclusive content including an extended version This behind the scenes vignette shows how the 4-clone scene from the the season two finale was conceived and created, providing an exclusive look at never-seen-before on-set footage with running commentary from co-creator and writer Graeme Manson and co-creator and director John Fawcett sharing their vision of the scene.

The new season hits the ground running with Sarah (Golden Globe® nominee Tatiana Maslany, Parks and Recreation), in a desperate race to find her missing daughter Kira (Skyler Wexler, Carrie) – a wild pursuit that brings her head-to-head with ruthless pro-clone, Rachel (Maslany). This season also rejoins Sarah’s clone sisters Alison (Maslany) and Cosima (Maslany) as they struggle to keep their clone world a secret and pick up the pieces of their broken lives – all while dealing with the harsh reality that no one around them can be trusted. The series premiered on BBC AMERICA April 19, 2014 and found an exclusive home on Amazon Prime Instant Video.

Reprising their roles are Matt Frewer (Falling Skies) as Dr. Aldous Leekie, the scientist who oversees the Dyad Institute’s clone experiment, Evelyne Brochu (Tom at the Farm) as Dr. Delphine Cormier, a beautiful colleague sent to monitor her eventual lover Cosima, Kristian Bruun (Life) as Donnie, Alison’s lump of a husband who is also secretly her monitor and Kevin Hanchard (Suits) as Detective Arthur ‘Art’ Bell, former partner to dead clone, Beth, who gets sucked into the secret clone world. Joining this season are Michiel Huisman (Nashville) as Cal, a rugged and resourceful outdoorsman with a sixth sense about people and situations, Peter Outerbridge (Nikita) as Johanssen, a mercurial modern-day cowboy and leader of a new breed of religious extremists and Ari Millen (Nikita) as Mark, a loyal follower of Johannsen and his religious teachings. Guest starring are Patrick J. Adams (Suits) as Jesse, a down to earth guy with guts to match his good nature, and Michelle Forbes (True Blood) as Marion Bowles, a powerful new player at the Dyad Institute with a birds-eye view of the war between Sarah and Rachel.

BBC Worldwide is the main commercial arm and a wholly-owned subsidiary of the British Broadcasting Corporation (BBC). BBC Worldwide Americas brings together all of BBC Worldwide businesses across North and South America. The company exists to maximize the value of the BBC’s assets for the benefit of the UK license payer, and invests in public service programming in return for rights. The company has five core businesses: Channels, Content & Production, Sales & Distribution, Consumer Products and Digital. Under these businesses fall two key brands in the U.S. – digital cable channel BBC AMERICA and BBC Worldwide Productions, the production arm responsible for the smash hit Dancing with the Stars.