Observe the New Poster, TV Spot, and More for the Season Premiere of FRINGE 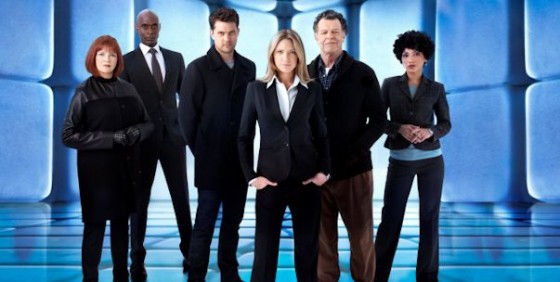 As the premiere of the final season of Fringe approaches, we happily dig in to a buffet of increasingly tasty appetizers served up by our friends at Fox. While not completely satisfying, they do at least help tide us over until we can dive in to Episode 501, “Transilience Thought Unifier Model-11” next Friday, September 28 at 9/8c.

Today our treats include a very cool new poster, and a different kind of public service announcement from the once-cool, now-forbidding Observers. 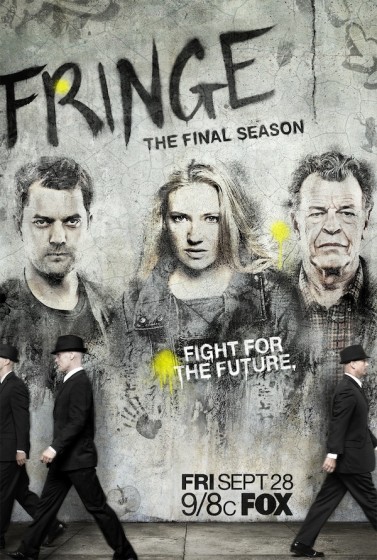 Fox will be airing last season’s pivotal episode 419, “Letters of Transit,” which we now know is the prequel to this final season, this Saturday at 11pm/10c. If you haven’t already secured your Season 4 on Blu-ray or DVD (completely recommended), then do try to catch this replay.

And just in case you’ve forgotten where we left off, or have been just a casual Observer (sorry), or if you’re new to the series and would like to see what all of the cheering is about, Fox has released this synopsis of the whole series, which includes a quick reminder of where we are as we enter Season 5.

FRINGE, the critically acclaimed and fan-favorite series, returns for a fifth and final 13-episode season that promises to deliver a climactic conclusion.

Picking up from the events depicted in last season’s flash-forward episode “Letters of Transit,” the seemingly peaceful “Observers” seized control of the universe in 2015. Now in 2036, they have become ruthless rulers who will reign supreme. What awaits in the future is the Fringe team’s final stand, which will bring together all that they have witnessed in preparation to battle and protect the world.

Set in Boston, the FBI’s Fringe Division started when Special Agent OLIVIA DUNHAM (Anna Torv) enlisted institutionalized “fringe” scientist WALTER BISHOP (John Noble) and his globe-trotting, jack-of-all-trades son, PETER (Joshua Jackson), to help in an investigation of an airline disaster that defied human logic. After the defining case was solved and furthermore revealed to be one of a series of unusual incidents linked together, the unlikely trio – supervised by Special Agent PHILLIP BROYLES (Lance Reddick) and assisted by ASTRID FARNSWORTH (Jasika Nicole) – was formed.

As unimaginable events continued to unfold, the Fringe Division’s investigations often led them to science and technological corporation Massive Dynamic and its enigmatic chief executive, NINA SHARP (Blair Brown). It was revealed that Walter and Massive Dynamic’s elusive founder and chairman WILLIAM BELL (guest star Leonard Nimoy) once were scientific partners, and had used Olivia as a test subject when she was a child.

Through the Fringe team’s investigations, Olivia learned that the root cause of these strange occurrences was due to the existence of a parallel universe. Even more shocking was the discovery that Walter had kidnapped Peter as a child from “over there” after his Peter had died, thus creating an imbalance between the two universes that threatened to tear both worlds apart.

Complications in these two separate, yet interconnected, worlds quickly began to ripple throughout each universe. Ultimately, Peter realized his kidnapping was the cause for the alternate world’s impending doom. So he chose to sacrifice himself by activating a device that saved the universe, bridged the two worlds together but erased him from existence.

Season Four found the Fringe Divisions working together to rebuild the alternate universe. Despite Peter’s seemingly permanent sacrifice, he returned very much alive and helped stop William Bell’s mad plans to collapse the two worlds together. Then, after Olivia learned she was pregnant with Peter’s child and all seemed right with the world(s), Walter received an ominous warning that “they” were coming.

Created by J.J. Abrams, Alex Kurtzman and Roberto Orci, FRINGE is produced by Bad Robot Productions in association with Warner Bros. Television. Abrams, Bryan Burk and J.H. Wyman serve as executive producers, while Kurtzman, Orci and Akiva Goldsman are consulting producers. “Like” FRINGE on Facebook at www.facebook.com/Fringe. Follow the series on Twitter and join the discussion at #fringe.

Fringe Season 4 Episode 19 “Letters of Transit” will be rebroadcast on Saturday, September 22 at 11pm/10c on Fox.