New Clip for the Next Episode of STAR WARS: THE CLONE WARS 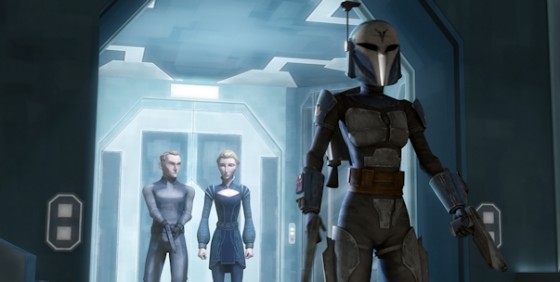 This week on Star Wars: The Clone Wars, with Duchess Satine as bait, the vengeful Darth Maul lures Obi-Wan into a trap. Drunk with power, Maul declares himself the true Sith Lord, a claim that will not go unanswered in “The Lawless” airing this Saturday, February 2nd at 9:30am ET/PT on Cartoon Network.

· This episode marks the first appearance of Darth Sidious “in the flesh.” In all other appearances, he has been a hologram.

· Obi-Wan Kenobi is wearing his Rako Hardeen disguise (from Season Four’s “Deception” arc) when he arrives on Mandalore.

· The much battered Twilight now sports a cartoonish illustration of Anakin as a boy Podracer pilot, with Aurebesh text that says “WIZARD!!!” The Twilight has not been seen since Season Two’s “Children of the Force.”