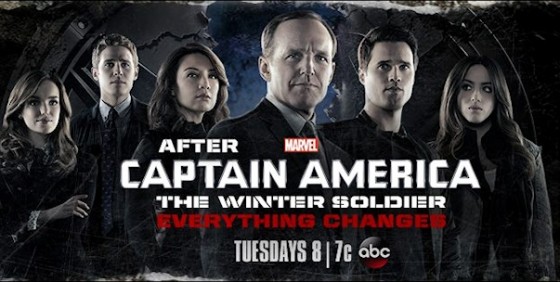 While we all wait with bated breath for tonight’s new episode of Marvel’s Agents of S.H.I.E.L.D. and how it will reflect the events of the Captain America: The Winter Soldier movie, we have a wee bit more news to fill the time. First, Marvel has joined Doctor Who in commissioning posters for new episodes, but Marvel has taken it a step further by providing episode clues, and making the posters available for purchase.

Entitled Marvel’s Agents of S.H.I.E.L.D.: The Art of Level 7, Marvel has brought artists from around the world “to celebrate the explosive final six episodes of the series’ inaugural season… Featuring a first look at key events in each episode, these exciting Marvel’s Agents of S.H.I.E.L.D. art pieces offer fans clues and enticements to the future of everyone’s favorite Agents with new images being unveiled every Thursday for six consecutive weeks.” 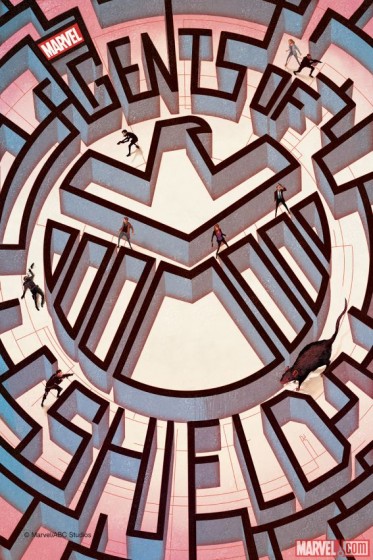 [T]the first in the series features the dynamic work of acclaimed artist Mike Del Mundo (ELEKTRA, X-MEN LEGACY) and spotlights the hotly-anticipated seventeenth episode of “Marvel’s Agents of S.H.I.E.L.D.” (“Turn, Turn, Turn”), premiering Tuesday, April 8 at 8:00 p.m. ET on the ABC Network. Coulson’s team comes face to face with the Clairvoyant and revelations that will change the series forever.

“As fans saw on Tuesday, ‘Marvel’s Agents of S.H.I.E.L.D.‘ is exploding with excitement so this is the perfect time to celebrate,” said Jeph Loeb, Head of Marvel TV. “We’ve partnered with Marvel‘s most sought after artists creating an exclusive first look into what the rest of the season has to offer.”

Each poster released in this series will be available as limited edition high quality prints at http://www.marvelstore.com/ArtOfLevel7 with the first print of the series to go on sale Friday, April 4 at 1:00 a.m. PT. These individually numbered prints are strictly limited to 100 copies and once they’re sold out, they won’t be available again from Marvel.

“I’ve always wanted to create art for TV and the fact that it’s TV for Marvel, made it even more intriguing,” explained Mike Del Mundo when asked about working on The Art of Level 7. “It’s definitely a show with great action, suspense and a cast of different and interesting characters so there were a lot of elements to play with when coming up with ideas. I’ve been a fan of Coulson since I saw him in ‘Marvel’s The Avengers,’ so being a part of his return was great, especially with an episode like this where all of the craziness happens in his world!”

Tune in on Tuesday, April 8 at 8:00 p.m. ET to catch a new episode of “Marvel’s Agents of S.H.I.E.L.D.,” “Turn, Turn, Turn,” on the ABC Network as the series airs with no repeats through to the shocking season finale.

Well, “no repeats” meaning no repeats in place of new episodes, because Marvel has also announced that this week’s new episode will  be repeated next week, on April 15 in the usual 8/7c spot, followed by the new episode:

From 8:00-9:00 p.m., ET, an encore presentation of the previous week’s episode, “Turn, Turn, Turn,” airs, in which Coulson and his team find themselves without anyone they can trust, only to discover that they are trapped with a traitor in their midst.

From 9:00-10:00 p.m., ET, the story continues with a new episode, “Providence,” which finds Colonel Glenn Talbot on the trail of Coulson and his team, who seek refuge in the last place anyone would look, where they begin to uncover S.H.I.E.L.D.’S most dangerous secrets–secrets that could destroy them all. Bill Paxton guest stars as Agent Garrett, Patton Oswalt as Koenig and Adrian Pasdar (“Heroes”) as Col. Talbot.

If, for some horrible reason, you missed last week’s episode, the one that really kicked things off, ABC is making it available for your study here.

And finally, news has come out that a certain someone will be making an appearance in the Agents of S.H.I.E.L.D. season finale, but THAT news is spoilery if you haven’t seen the movie. So that news bit will come after the lovely reminder of what happened near the end of last week’s episode, so skip past that if you haven’t seen last week’s episode. Sheesh, get ON this, people! 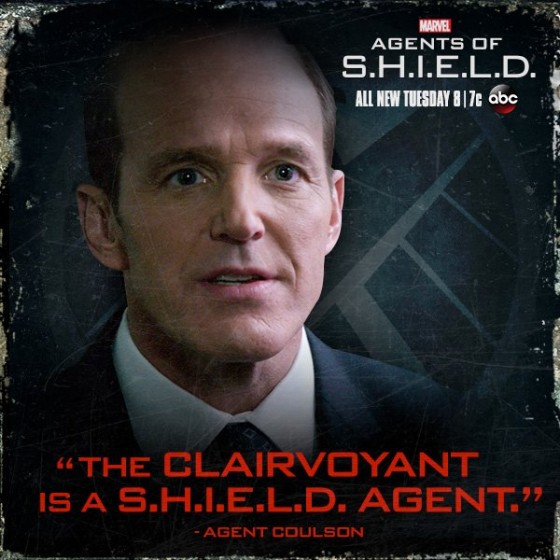 SPOILER ALERT: Last warning – don’t read this if you haven’t yet seen Captain America: The Winter Soldier. Vulture first posted the scoop that former S.H.I.E.L.D. director (see what I did there?) Nick Fury will be making an appearance in the Agents of S.H.I.E.L.D. season finale, but Samuel L. Jackson would say no more: “You’re trying to get me fired and killed! I don’t talk about Marvel‘s business. None of us do.” END OF SPOILER

Make sure to watch the TV spot and featurette we posted yesterday to get yourself fully ready for tonight’s new episode. Bring it!