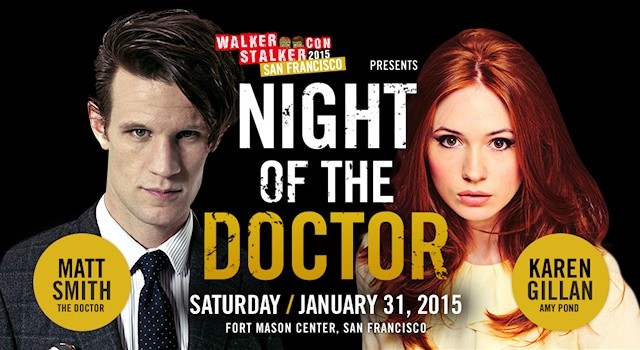 Walker Stalker Con is a convention that takes place in various cities throughout the year, and is reputed to be one of the best cons ever for zombie fans. Smaller than Comic-Con, and of course more specialized, it’s said to offer much better access to all of the special guests, as well as a chance to hang out with others of your (our) kind. Special guests at the next Walker Stalker Con, which is scheduled for the end of this month in San Francisco, include current and former stars of The Walking Dead, like David Morrissey (the Governor), Jon Bernthal (Shane), and Steven Yeun (Glenn) as well as Robert Englund, Freddy from the Nightmare on Elm Street franchise.

But wait, there’s more: a genre mashup of sorts has been announced. Whovians, meet the Walker Stalkers. Walker Stalkers, meet the Whovians. Of course I know that a good number of you are both. If you’re only one or the other, however, the good news continues. Matt Smith and Karen Gillan will be attending both the San Francisco Walker Stalker Con, and a separate connected event, “Night of the Doctor,” that does not require admission to the zombie con. You can even get tickets to sit in the first two rows. While supplies last, of course. Oooo!

San Francisco, CA – In addition to the 45 guests previously announced, Walker Stalker Con has announced that Doctor Who’s Matt Smith (the 11th Doctor) and Karen Gillan (Amy Pond) will be attending the convention, located at the the Fort Mason Center on January 31st & February 1st, 2015.

Matt Smith & Karen Gillan will also be doing a separated ticket event called, NIGHT OF THE DOCTOR on Saturday night. For more information on this event visit www.nightofthedoctor.com.

Walker Stalker Con returned to its inaugural city of Atlanta in October of 2014 where its attendance count reached nearly 35,000 fans across it’s three day span. It also assembled more cast members of The Walking Dead than any other convention has, as well as other horror genre actors.

Walker Stalker Con is not just a convention. It is a fan meet-up and an opportunity for each guest to come away feeling like they’ve had an amazing experience and became part of a greater community of zombie lovers! Walker Stalker Con is two days of events, panels, and experiences that zombie fans won’t find anywhere else!

Confirmed guests for the convention include:

The full event schedule can be found at http://walkerstalkercon.com/sanfrancisco/