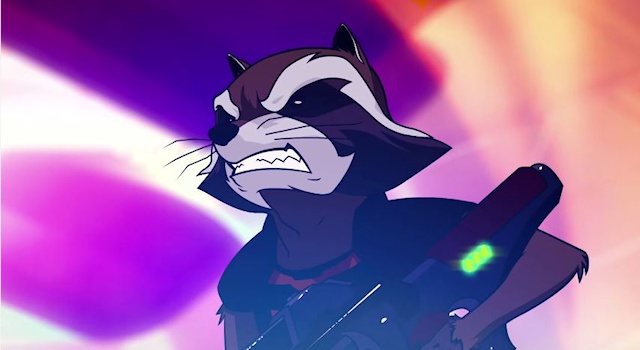 Some of the best news from New York Comic Con 2014 was announced by Marvel: coming our way in 2015 on Disney XD… Marvel’s Guardians of the Galaxy, the animated version. Yes, Peter Quill/Star Lord, Gamora, Rocket Raccoon, Groot, and Drax, on our screens, every week. YES PLEASE. See the “test” clip, followed by the press release:


Production has begun on “Marvel’s Guardians of the Galaxy,” an upcoming animated television series for Disney XD featuring the hugely popular characters introduced in the record-breaking Marvel Studios film of the same name. The announcement was made today by Jeph Loeb, Marvel‘s Head of Television, at New York Comic Con. Produced by Marvel Television, the series stars Peter Quill as Star-Lord, the brash adventurer who, to save the universe from its greatest threats, joins forces with a quartet of disparate misfits — fan-favorite Rocket Raccoon, a tree-like humanoid named Groot, the enigmatic, expert fighter Gamora and the rough edged warrior Drax the Destroyer. The series will premiere in 2015 on the Marvel Universe programming block on Disney XD.

“This is a very exciting time for the Marvel Animation Studio as we get to explore the cosmic side of the Marvel Universe by developing the first-ever ‘Marvel’s Guardians of the Galaxy‘ animated series,” said Jeph Loeb, Head of Marvel Television. “After starring in the biggest movie of 2014, everyone wants more of Star-Lord and his crew – now they’ll get it.”

With the success of its recent theatrical release, Guardians of the Galaxy has joined the Avengers and Spider-Man as one of Marvel’s most prominent franchises. Premiering in August 2014, Marvel’s Guardians of the Galaxy debuted to rave reviews and a $94 million opening weekend – the largest August opening in North American history. The film has become the most successful domestic release of 2014, topping the box office for four weeks since its release.