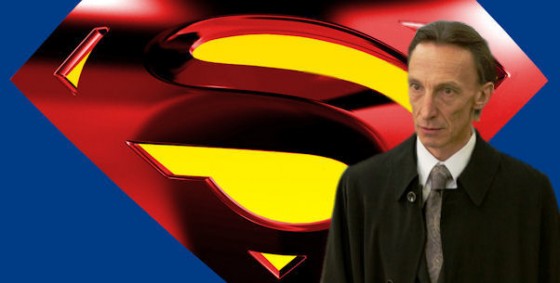 Just last month, we brought you the news when Russell Crowe (The Man with the Iron Fists) who portrays Jor-El, the biological father of Clark Kent/Superman (Henry Cavill) in the forthcoming Zack Snyder directed, Man of Steel revealed that Jor-El would be battling General Zod (Michael Shannon) on Krypton in the hotly anticipated reboot.

Now, it appears they won’t be alone. In a recent interview on the Canadian channel, Space, actor Julian Richings revealed that he too will be acting on Krypton alongside Michael Shannon and Russell Crowe. Richings couldn’t reveal much more than that to the hosts of Innerspace, though he does say that the scenes he filmed over the course of a week in Vancouver were done opposite Crowe and Shannon in a place the size of a hockey arena that was one giant green screen.

Fans of the hit series Supernatural on The CW may know Julian Richings better by one word, Death. Richings ties to scif-fi/fantasy and horror don’t end there, having had roles in Todd and the Book of Pure Evil, Lost Girl, Percy Jackson & the Olympians: The Lightning Thief and X-Men: The Last Stand (among others).

Check out the interview with Innerspace below!