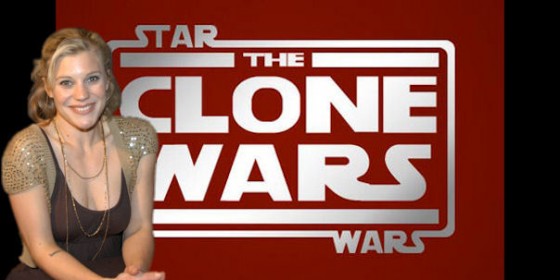 Hold onto your seats, fanboys. Starbuck is crossing over to the Star Wars universe! Katee Sackhoff will be voicing a “memorable character” in the upcoming season of Star Wars: The Clone Wars. Supervising director, Dave Filoni, would only say this about Sackhoff’s character:

“[Katee’s] going to be voicing a character, who’ll appear next season. Everybody here loved Battlestar Galactica. It was such a great, inspirational series, and I think fans will be very pleased with the character she portrays. Let me say this, it will be a memorable character, that is for sure.”

Filoni cannot deny the influence of Battlestar Galactica on Star Wars: The Clone Wars. Check out this excerpt from an interview with EW:

Q: Actually, there’ve been a number of BSG references on the show lately, like how a Separatist tactical droid said “By your command” a la the old chrome-domed Cylons.

DF: See that’s me being old, because that’s classic Battlestar. The Separatist tactical droids have a similar sounding voice to old Cylons. In fact, the inspiration I had for those tactical droids was a Cylon in the original series called Lucifer. He was Baltar’s adviser. I always like the idea of this really smart droid that could calculate all these possibilities. I thought the Droid Army should have these brainiac droids that could wage battles based on calculations of probability whereas the Jedi are fighting out of heart and commitment to each other.

How would you like to see Katee Sackhoff in the Star Wars universe?