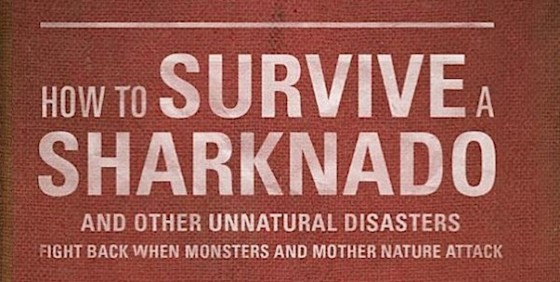 Yes, completely serious. Well, serious that there is a book, and there is a video game. With chapters like “How to Wield a Chainsaw Like a Boss,” the book is probably more for entertainment value than some of you might hope. How to Survive a Sharknado and Other Unnatural Disasters is available now; the ordering link is below the press release. The iOS game Sharknado: The Video Game will be available at the end of the month.

SYFY AND THE ASYLUM PARTNER WITH MAJESCO ENTERTAINMENT TO RELASE SHARKNADO: THE VIDEO GAME FOR iOS DEVICES

Sharknado 2: The Second One premieres on Syfy Wednesday, July 30 at 9PM (ET/PT).

Syfy and The Asylum have partnered with Three Rivers Press, an imprint of the Crown Publishing Group at Random House, Inc., on the trade paperback original HOW TO SURVIVE A SHARKNADO AND OTHER UNNATURAL DISASTERS: Fight Back When Monsters and Mother Nature Attack.

On sale now, HOW TO SURVIVE A SHARKNADO AND OTHER UNNATURAL DISASTERS is the first and only comprehensive guide to surviving the dangers of a post-apocalyptic world where Mother Nature is angry and monsters are hungry. Inside this life-saving reference book, readers will find vital information on everything from firenados and swamp volcanoes to arachnoquakes and piranhacondas.

HOW TO SURVIVE A SHARKNADO AND OTHER UNNATURAL DISASTERS provides easy-to-follow tips on how to study, avoid, and survive the very worst of Mother Nature, including tactics for fighting back against land and sea beasts, instructions on “How to Wield a Chainsaw Like a Boss,” and useful recipes for getting through the apocalypse (such as the Four Horsemen cocktail). From humor writer Andrew Shaffer with contributions from Sharknado survivors Fin Shepard and April Wexler—like the S.S.A.T. (Shepard Survival Assessment Test)—HOW TO SURVIVE A SHARKNADO AND OTHER UNNATURAL DISASTERS is the essential book to have in the event of disaster, calamity, or flying shark attack.

To learn more about HOW TO SURVIVE A SHARKNADO AND OTHER UNNATURAL DISASTERS visit: www.sharknadobook.com

Syfy and The Asylum, through their licensing and merchandising agency Earthbound, are also partnering with game developer Other Ocean and publisher Majesco Entertainment Company to release SHARKNADO: THE VIDEO GAME for the iPhone, iPad and iPod Touch. Designed in the popular ‘infinite runner’ genre, players assume the lead role as Fin as they race to destroy a series of shark-infested tornadoes threatening New York City. The game will release prior to the July 30 premiere of Sharknado 2.

In SHARKNADO: THE VIDEO GAME, players will:
• Run through the streets of Manhattan wielding a broadsword
• Bounce off of the backs of tiger sharks to reach higher ground
• Feed buckets of fish to angry sharks to avoid dying
• Surf New York’s flooded avenues, avoiding hammerhead stampedes
• Collect official Sharknado trading cards
• Grab a chainsaw and fly into the heart of a sharknado, destroying it from the inside

To learn more about SHARKNADO: THE VIDEO GAME visit: www.otherocean.com

“The extensions of our brands like Sharknado and Mega Python vs. Gatoroid into books and video gaming are part of The Asylum‘s overall growth and commitment to our fans,” said David Latt, Sharknado Producer and co-founder of The Asylum. “We look forward to taking a bite out of publishing and video gaming with the upcoming release of these properties and Sharknado 2.””

“When I saw Sharknado, I really took Fin Shepard’s mantra, Semper Paratus (Always ready), to heart. Sure, other books can help you fend off your garden-variety shark, but what do you do when angry, chomping Great Whites are flying at your head? HOW TO SURVIVE A SHARKNADO AND OTHER UNNATURAL DISASTERS answers that critical question, and many more. I’m thrilled to work with Syfy and The Asylum on this life-saving book,” said Matt Inman, the acquiring editor at Crown Publishing.

“When Majesco approached us about making a Sharknado game, we said ‘yes’ before they’d even finished asking,” said SHARKNADO: THE VIDEO GAME designer Frank Cifaldi. “The game we came up with is very much in the spirit of the films: ridiculous, overblown, yet oddly sincere. We can’t wait for fans to sink their teeth into it.”

Syfy is a media destination for imagination-based entertainment. With year round acclaimed original series, events, blockbuster movies, classic science fiction and fantasy programming, a dynamic Web site (www.Syfy.com), and a portfolio of adjacent business (Syfy Ventures), Syfy is a passport to limitless possibilities. Originally launched in 1992 as SCI FI Channel, and currently in 96 million homes, Syfy is a network of NBCUniversal, one of the world’s leading media and entertainment companies. NBCUniversal is a subsidiary of Comcast Corporation. (Syfy. Imagine Greater.)

The Asylum is one of the world’s leading brand-oriented motion picture and television studios. With a focus on high-concept, market-driven entertainment, like Sharknado, The Asylum finances, produces and releases 25 films per year through its direct pipeline to the nation’s top retailers and its network of international distribution partners. Since its founding in 1997, The Asylum has released more than 500 films and has built a library of over 200 original productions, including top-rated movie premieres for Syfy, Lifetime and Animal Planet networks

Other Ocean Group is a game developer based in Emeryville, CA and Newfoundland, Canada, Other Ocean Group develops award-winning games and conducts Quality Assurance and Community Management for the industry’s most established publishers. Notable titles from the company’s storied history include Dark Void Zero, Hexic for Windows, NBA Rush, Castlevania: Symphony of the Night for Xbox 360, and the upcoming couch competitive eSport #IDARB. For more information, visit OtherOcean.com.

Majesco Entertainment Company is an innovative developer, marketer, publisher and distributor of interactive entertainment for consumers around the world. Building on more than 25 years of operating history, the company develops and publishes a wide range of video games on console, handheld and mobile platforms, as well as digital networks through its Midnight City label. Majesco also owns 50% of GMS Entertainment, the parent company of online gaming company Pariplay, which specializes in iGaming, iLottery and social gaming. Majesco is headquartered in Edison, NJ and the company’s shares are traded on the Nasdaq Stock Market under the symbol: COOL. More info can be found online at majescoent.com or on Twitter at twitter.com/majesco.