Jerry Rees Signs On For THE MARVEL EXPERIENCE 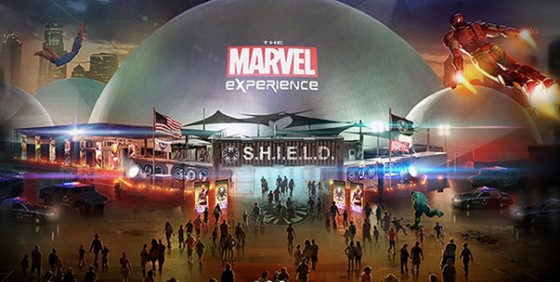 Rees has directed a record-setting 16 Disney Theme Park attractions around the world in California, Hong Kong, Florida and Paris, including winning THEA Awards for “Cinemagique” for ‘Best Attraction’, as well as “Animation Magic”, Disney’s new cruise ship attraction which won for ‘Most Innovative Use of Technology.’

Launching later this year, The Marvel Experience is, at its heart, a next-generation event that will fully immerse visitors in an entertainment experience like no other. With one original narrative tying everything together from start to finish, the story will unfold via a series of state-of-the-art multimedia technologies and interactive elements, including a 4-D motion ride, original 3-D animated features and the only commercially available Stereoscopic 360-degree full Dome projection extravaganza.

“Hero Ventures was looking for the impossible as we searched for someone to take all of the amazingly unique elements that we developed with Marvel to bring everything to life in this first-of-its-kind production. Thankfully, Jerry Rees brought a lifetime of creativity to the table and took The Marvel Experience to places well beyond our imagination,” said Rick Licht, Hero Ventures’ CEO.

“’Firsts’ have always energized me…and collaborating with like-minded, pioneering souls over the years to uncover new firsts has always been a joy,” says Jerry Rees. “This visionary project will add more firsts to the list, merging new-media immediacy, immersion and connectivity with a powerfully engaging spectacle. Hero Ventures’ choice of the iconic Marvel IP as the emotional engine and their use of a movable, multi-Dome venue to involve new audiences is inspired. The Marvel Experience will be a shining beacon on the emerging next-gen entertainment horizon and I’m honored to be a part of the project.”

“We couldn’t be more excited about our collaboration with such a multi-talented and accomplished group, merging feature-film quality animated content with Hall of Fame quality scenic/sets in this never-before-seen production,” says Hero Ventures’ COO Doug Schaer. “We expect The Marvel Experience will absolutely redefine entertainment as we know it.”

Leading up to the tour, Hero Ventures will be updating and educating fans on the progress of tour production with the use of blog posts, social media, teaser videos, character reveals and exclusive artwork and images.

To learn more about The Marvel Experience and access the latest news on special offers, tour dates and locations, visit www.TheMarvelExperienceTour.com.

Keep up to date on all the exciting developments through the tour’s array of social channels:
Facebook — www.facebook.com/MarvelExperience
Twitter — @TheMarvelExp; twitter.com/themarvelexp
Google+ — http://gplus.to/themarvelexp

ABOUT MARVEL
Marvel Entertainment, LLC, a wholly-owned subsidiary of The Walt Disney Company, is one of the world’s most prominent character-based entertainment companies, built on a proven library of over 8,000 characters featured in a variety of media over seventy years. Marvel utilizes its character franchises in entertainment, licensing and publishing. For more information, visit www.marvel.com. © MARVEL

ABOUT THE THIRD FLOOR
THE THIRD FLOOR is a preeminent visualization company based in Los Angeles, London, Sydney and Montreal. Since 2004, the studio has helped clients on location and around the world map out the creative storytelling and technical execution for motion pictures, video games, special venue attractions, television shows and other productions by creating computer-animated blueprints, known as “previsualizations.” THE THIRD FLOOR’s feature film credits include, Edge of Tomorrow, X-Men: Days of Future Past, Godzilla, Marvel’s Thor, Marvel’s Iron Man 3, Marvel’s Thor, Marvel’s The Avengers, Maleficent and Avatar. For further information and credits, visit www.thethirdfloorinc.com.