It’s New Comics Night on Tonight’s WMD RADIO, Plus Redshirt Ryan is Back on WMD AFTER DARK

Yay, it’s Wednesday, known around here as WMD Radio Day! That is meant to include, of course, WMD After Dark, which is a hoot, so don’t leave when WMD Radio proper (term used loosely here) is over, because the lightning rounds of After Dark are worth your additional half hour.

Tonight on WMD Radio the guys will be talking about some new comics, and I for one am especially interested in “All New Captain America #1,” hoping that it is an excellent representation of Cap. Whaddaya say, guys? 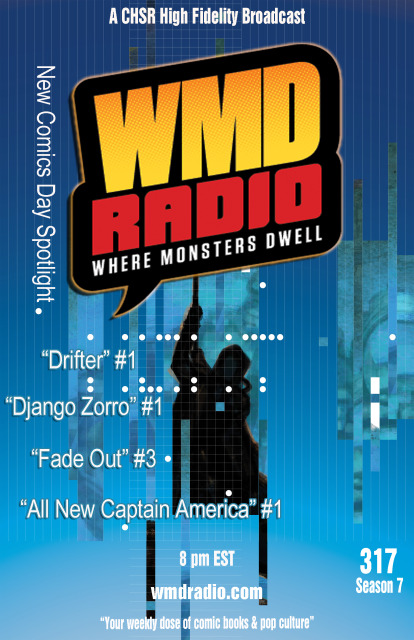 This week on WMD Radio we’re going to take some time to talk about some comics that hit the stands last week.

Not a bad crop of comic goodness, hope you can tune in.

Only two weeks left to enter our November contest! Go to www.wmdradio.com/contest for full details on how you can get your hands on a Walking Dead prize pack courtesy of Strange Adventures!

As always, we welcome your participation on the show – and there are MANY ways you can do this. Join us live by posting to our Facebook page, send us a message onTwitter (@WMDRadio), message us through our Mixlr feed or call 506-453-4949.
Where Monsters Dwell is brought to you by Strange Adventures and Club Fred Grafx.

And don’t forget WMD After Dark:

Episode 004 – The Return of Redshirt Ryan

It was only ONE episode, BUT when Redshirt is away, the Monsters WILL play. After last week’s no-holds-barred free-for-all with Fred and Drew from Against the Mat, Ryan’s back to lay his signature rapid-fire smack down on the panel. Joined by CHSR‘s very own Mark Kilfoil, this week’s installment of After Dark promises to be an orderly affair where everyone plays by the rules.

We do, however, make those rules up as we go…so there’s that. Welcome back Fredshirt…er…Redshirt.

WMD After Dark is sponsored by Marx Entertainment and Music Apparel.

Don’t forget, show the guys some love and you may win the huge Walking Dead November Prize Pack! Get yer details here, or click on the link under our Contests and Giveaways list in the column on the right.

Listen tonight to WMD Radio live at 8/7c on WMDRadio.com!

And don’t miss WMD After Dark live at 9/8c on AfterDark.WMDRadio.com!

If you can’t make it, you’ll have to wait a few days, but the guys are cool enough to post the shows as downloads on the sites. Thanks, guys!