I, Frankenstein Coming to DVD, Blu-ray And Digital From Lionsgate Home Entertainment 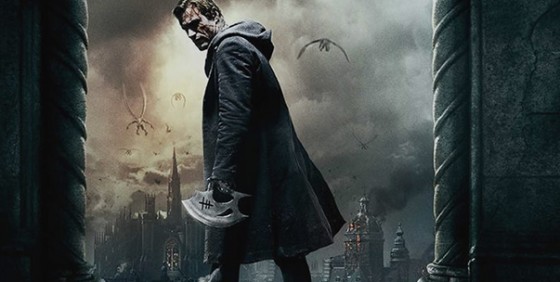 Here’s everything you need to know about Lionsgate Home Entertainment’s release of I, Frankenstein starring Aaron Eckhart, Bill Nighy, Yvonne Strahovski, Miranda Otto and Jai Courtney. I think the most intriguing part of the release is going to be all the from-graphic-novel-to-big-screen featurettes.

From the producers of Underworld, Aaron Eckhart stars in the dark fantasy action thriller, I, Frankenstein, arriving on 3D Blu-ray (plus 2D Blu-ray, DVD and Digital HD UltraViolet), along with DVD (plus Digital UltraViolet), Video On Demand and Pay-Per-View, May 13 from Lionsgate Home Entertainment. The film will also be available earlier on Digital HD May 2

Aaron Eckhart (The Dark Knight) portrays one of the most iconic horror legends of all time in the gripping adventure I, Frankenstein, available on 3D Blu-ray (plus 2D Blu-ray, DVD and Digital HD UltraViolet), along with DVD (plus Digital UltraViolet), Video On Demand and Pay-Per-View, May 13 from Lionsgate Home Entertainment. This film will be available on Digital HD May 2. From the producers of Underworld, I, Frankenstein follows Frankenstein’s monster (Eckhart) as he becomes involved in a war between two immortal clans. Also starring Bill Nighy (Harry Potter and the Deathly Hallows Part 1, Pirates of the Caribbean: Dead Man’s Chest), Yvonne Strahovski (TV’s “Chuck,” TV’s “Dexter”), Miranda Otto (The Lord of the Rings: The Return of the King, TV’s “Rake”), Jai Courtney (upcoming Divergent, A Good Day to Die Hard) and Kevin Grevioux (Underworld, Underworld: Rise of the Lycans), I, Frankenstein was written for the screen and directed by Stuart Beattie (30 Days Of Night, G.I. Joe: The Rise Of Cobra) with a screen story by Kevin Grevioux and Stuart Beattie.

The explosive thriller takes place 200 years after Dr. Frankenstein’s shocking creation came to life. Celestial forces name the creature Adam, and arm him with weapons to defeat the demons that are constantly seeking his destruction. However, soon Adam finds himself in the middle of a war over the fate of humanity and discovers that he also holds the key that could destroy humankind.

Based on The Darkstorm Studios graphic novel “I, Frankenstein” created by Kevin Grevioux, the 3D Blu-ray and DVD are packed with insightful bonus features including audio commentaries with Co-writer/Director Stuart Beattie and Filmmakers Gary Lucchesi, Richard Wright, James McQuaide and Kevin Grevioux, as well as two behind-the-scenes featurettes. I, Frankenstein will be available on 3D Blu-ray and DVD for the suggested retail price of $39.99 and $29.95, respectively.