How to Spend Your 4th, Part 3: THE WALKING DEAD Marathon and Season 5 Sneak Peek 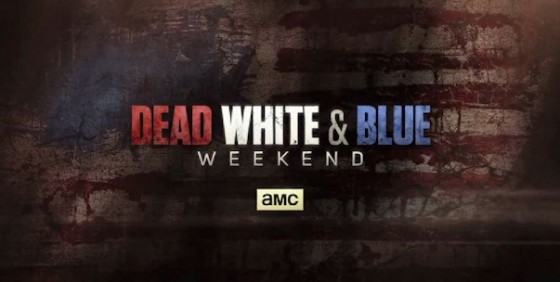 And now, for those of you who want to stay inside for the entire long weekend, we have what AMC is calling the Dead, White and Blue Weekend; a replay of the entirety of The Walking Dead to date, ending with a new Talking Dead episode with sneak peeks at Season 5.

There’s also information about a couple of upcoming behind the scenes specials. Check it all out after the TV spot and featurettes:


CELEBRATE SUMMER WITH THE WALKING DEAD

FROM FRIDAY, JULY 4 TO SUNDAY, JULY 6

FOR IMMEDIATE RELEASE – Celebrate summer with AMC’s “Dead, White and Blue” Weekend from Friday, July 4 through Sunday, July 6. All weekend long AMC will air a special marathon of its award-winning drama The Walking Dead, the #1 show on television among Adults 18-49. All four seasons of the hit series will air back-to-back beginning Friday, July 4 at 9:00 a.m. ET/PT, and also include a first look at the highly anticipated fifth season. The sneak peek will post to AMC.com following air. The marathon weekend culminates with a Talking Dead Season 5 Preview Special, hosted by Chris Hardwick, on Sunday, July 6 at 9:00pm ET/PT featuring The Walking Dead showrunner and executive producer Scott M. Gimple and actress Aisha Tyler. The fifth season of The Walking Dead premieres this October.

Fans can also check out two new documentaries about The Walking Dead, produced by Big Machine for AMC Studios, which feature all-new behind-the-scenes footage and interviews with the cast and producers from the set in Atlanta:

This one-hour documentary will showcase how this remarkable series is made. The executive producers will discuss the process of mapping out the show and viewers will hear from all of the key production departments – from production design and special effects to costumes and makeup – about their role in crafting the world of The Walking Dead.

· Inside The Walking Dead: Walker University –Tuesday, July 15 at 10:00pm ET/PT AMC’s second doc will follow the journey from extra to walker. Viewers will learn that there is much more to becoming part of the living dead than just make-up, and will get an inside perspective on the choreography, acting and motivation behind each zombie, including a look at what takes place at The Walking Dead’s own Zombie School.

The Walking Dead is based on the comic book series written by Robert Kirkman and published by Image Comics. The series tells the story of the months and years after a zombie apocalypse and follows a group of survivors, led by sheriff Rick Grimes, who travel in search of a safe and secure home. The Walking Dead stars Andrew Lincoln, Norman Reedus, Steven Yeun, Lauren Cohan, Chandler Riggs, Melissa McBride, Emily Kinney, Danai Gurira, Chad Coleman and Sonequa Martin-Green. The series is executive produced by Gimple, Robert Kirkman, Gale Anne Hurd, Greg Nicotero, David Alpert and Tom Luse.

Talking Dead, AMC’s live after show that serves as a platform for discussion on The Walking Dead, is produced by Embassy Row and executive produced by Michael Davies, Jennifer Kelly Patton and Brandon Monk.

About AMC
Whether commemorating favorite films from every genre and decade, or creating acclaimed original programming, AMC brings to its audience something deeper, something richer, Something More. The network reigns as the only cable network in history ever to win the Emmy® Award for Outstanding Drama Series four years in a row, and boasts the most-watched drama series in basic cable history with The Walking Dead. AMC’s original drama series include Mad Men, Breaking Bad, The Walking Dead, Hell on Wheels, Turn, Halt and Catch Fire and the forthcoming Breaking Bad spinoff, Better Call Saul. AMC also explores authentic worlds with bold characters through its slate of unscripted original series like Comic Book Men, Small Town Security, Talking Dead, Game of Arms and Freakshow. AMC is owned and operated by AMC Networks Inc. and its sister networks include IFC, Sundance Channel, and WE tv. AMC is available across all platforms, including on-air, online, on demand and mobile. AMC: Something More.