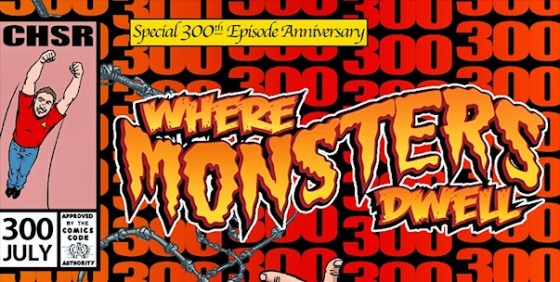 CONGRATULATIONS to everyone involved in the production of our favorite comics radio show, Where Monsters Dwell, on their 300th episode tonight! WMD is a completely wonderful, engaging, entertaining show, and a must-listen for anyone interested in comic books, from newbies to veterans.

We are told that special guests abound tonight, both in the studio and on the phone, though their identities are currently secret. I’m really hoping masks and capes are involved. 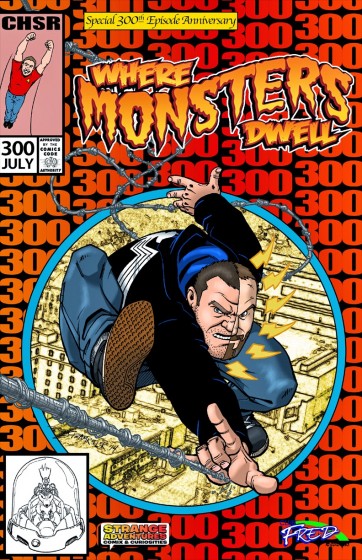 The festivities get underway at 8 pm EST / 9 pm AST, for this special 2-hour episode, and while it’s true every week, this week they are especially interested in having us all participate in the show by posting on the WMD Facebook wall or giving the show a call during the broadcast at 506-452-6056 (they’re in Canada – as you’ll know when you listen, and hear them say “about”).

If you do have to miss tonight’s live show, you’d better have an excellent excuse, like waiting in line to get into Preview Night at Comic-Con (sorry guys), the WMD men are cool enough to post their shows as podcasts, so you’ll be able to listen to the show when it posts later this week, either from the Where Monsters Dwell website, or subscribe to the podcast on iTunes here. Thanks guys!

One more hearty congratulations and a vast amount of geeky love from SciFi Mafia to Remington J. Osborne, Monster Mike, Red Shirt Ryan, and Chuck “Chewie” Barry on the milestone.

Where Monsters Dwell broadcasts live tonight at the special time of at 8:00/7:00c tonight for TWO HOURS, right here.