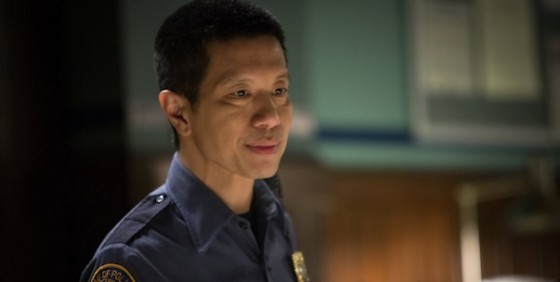 This week’s episode of Grimm is one of my favorite episodes ever. The writing, the character development, and particularly the performance of Reggie Lee as Sgt. Wu are all top of the line. The particularly creepy Wesen of the week is based on a legend from the Philippines, and the usually snarky deadpan wisecracking Sgt. Wu takes quite a turn — not to couch-eating crazytown, but in the opposite direction. Sensitive, concerned, angry, and more.

Earlier this week Reggie Lee participated in a press question and answer session, and I asked him about this turn in his character. Check that out after this episode synopsis, in the form of a note from the show’s executive producers:

We are so excited to bring you the March 7 episode of “Grimm” entitled “Mommy Deareast.”

In this episode we were able to focus on Sgt. Wu and learn something that we have all been waiting to learn – his first name! Aside from that earth shattering information, this episode also gave us the opportunity to do another unique cultural story by introducing the legend of the Aswang which originates from the Philippines. Reggie Lee is a native of the Philippines and this was a great moment for us to not only tell a unique story from his heritage but also showcase Reggie’s talent. The Aswang is one of the most ruthless Wesen we have seen yet!

Also, this is an important episode for Adalind as she will be dealing with more than one change occurring in her life.

I hope you enjoy watching this as much as we enjoyed bringing this story to life!

Here’s the SciFi Mafia portion of the question and answer session:

SciFi Mafia: I’ve also seen the upcoming episode and wow, congratulations on and thank you for your superb performance. It’s such a change of pace for Sergeant Wu.

Reggie Lee: That makes me feel good. Thank you. Thank you so much. I had a blast.

SciFi Mafia: I know it’s sometimes unnerving for actors to take on kind of a different route with their character, but you totally nailed it. It was just really fun to watch.

Reggie Lee: Thanks. That was different. I’m so glad – I’m very appreciative of what you just said just now because it was a question in my mind. It was like, wow, Wu is so known for his sarcasm and being sardonic and that’s how I’m used to — that’s in my body now at this particular point, you know. And then to get this script and go, (there’s something) in here that you don’t ever see him in a state of, you know, being out of control.

So to blend the two was a real question and a wonderful, wonderful fulfilling time for me to actually work on, outside of shooting it. So the stuff that I did beforehand to get to prepare was really fun for me. So thank you for noticing that.

SciFi Mafia: What did you do to prepare for it?

Reggie Lee: You know, Silas (Weir Mitchell, who plays Monroe) and I have gone to the same acting coach for over 10 years. We’ve studied with each other. Before we even got this show we were doing a scene together in acting class. When we got this show together it was just really kind of cool.

But when I got this script, the way we both kind of prepare is — there’s no shorthand, how we prepare. We kind of imagine, for hours on end. So when I saw this script I actually went through it and marked it and logged about 100 hours of homework before I started shooting this particular episode. So I would find time to kind of — I was doing homework for about eight to ten hours a day where I would literally sit and imagine.

It’s kind of … say if you were a kid — and this is the way we usually do it — if you’re a kid you stare at the closet wall and say there’s a monster in there, after about 10 minutes you’d actually think that there was a monster in there. And it would feel as real to you as possible. So that’s kind of how I work now. So there’s no shorthand to that. You kind of sit and imagine the circumstances being as real to you as possible. So in that effect, it did take 100 hours, but it was fun. It was fun. Once I got on set I could let it go and really just fly and have fun. So I’m appreciative that you’ve noticed that.

SciFi Mafia: Well, absolutely. And thank you so much for that. Do you have a favorite other Filipino legend that you’d like to see them bring in?

Reggie Lee: Yes! I mean there’s so many, but the really – there’s one popular one called the manananggal, which is also an aswang, which is kind of a person that separates in half that goes flying around. Yes, so that’s the other really popular one. There’s that and there’s also one called the white lady — which is akin to La Llorona, the Mexican folklore that we did — which is really freaky, that we’ve all grown up with. So maybe they could do a version of that. You know, who knows? Because I think they really enjoyed doing this one. Hopefully we’ll have another one sometime.

Lee also said this about this week’s Wesen:

Meaning truly a Filipino legend, not some fantasy of the writers’ room. SO CREEPY.

Because most of us on the conference call had seen the screener of this week’s new episode, I’ll save the rest of the transcript until after the episode airs to keep this spoiler-free, but really, do not miss this episode. The things that happen, and Reggie Lee‘s performance… just don’t miss it.