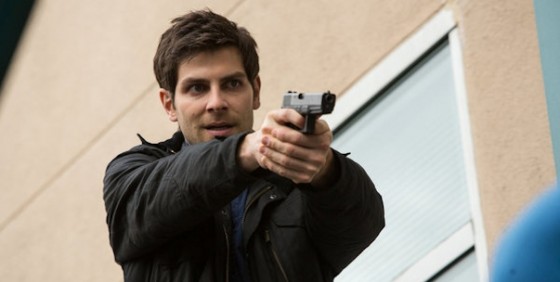 Grimm is back tonight for its third-to-last episode of Season 2, and things continue to ramp up. Of course, now that Juliette is remembering, what are the chances that things will work out for our favorite Portland couple? Before we find out, let’s see what David Giuntoli had to say to SciFiMafia.com recently about some of his favorite times, and a cool little insider bit o’ info about his partner on the force:

David Giuntoli: Something about Season Two that I’ve really loved, and going into Season Three that I’m going to continue to love, is more and more of the main characters are “in the know” (about the Grimm world) which means that certain characters can interact that wouldn’t have during much of Season Two, or all of season one. And it brings a fresh, lovely dynamic to scenes where I’ll be in a room with say, a completely new group of actors and watching them interact. And there’s comedy to be found in it when someone is learning the ropes of the Grimm world for the first time. I really enjoy those scenes where we all get to spend the whole day together.

I really do enjoy the moment of levity in the dark world of Grimm. And there was a scene in particular that played in the “Volcanalis” episode where Russell Hornsby’s character Hank went on vacation.

It was so – it was almost out of another show like an Ally McBeal episode. But it was very fun. It was fun. And here’s a fun bit of info. That episode – that scene was written in reaction to Russell in real life snapping his Achilles tendon. So he can walk we had to somehow keep him in a chair and get him off of the show for two episodes so he can get surgery.

So this is kind of some of the behind the scenes info that I always find very interesting.

David Giuntoli: Yes, Russell tore his Achilles tendon while watching the Super Bowl — literally. And sober as a judge.

SciFiMafia.com: So he’s going to be out of the next episode as well then?

David Giuntoli: Two episodes and then he’ll come back.

SciFiMafia.com: Okay, great. Did that cause a problem with the story line at all?

David Giuntoli: No problem really. We just a couple of things had to be tweaked. I’ll do a little more working with Wu, with Sergeant Wu, which was really fun and a pleasure to get to work so much with Reggie Lee. He is just a phenomenal actor. So it shook things up for a little while. But I think it was fresh and really wonderful. And Russell I think is fully repaired at this point.

Before checking out the TV spot and clip from tonight’s new episode, here’s a reminder of last week’s shenanigans:

Clip: Grimm – Wesen Baby on Board