Get Your Home Release of Disney’s INTO THE WOODS 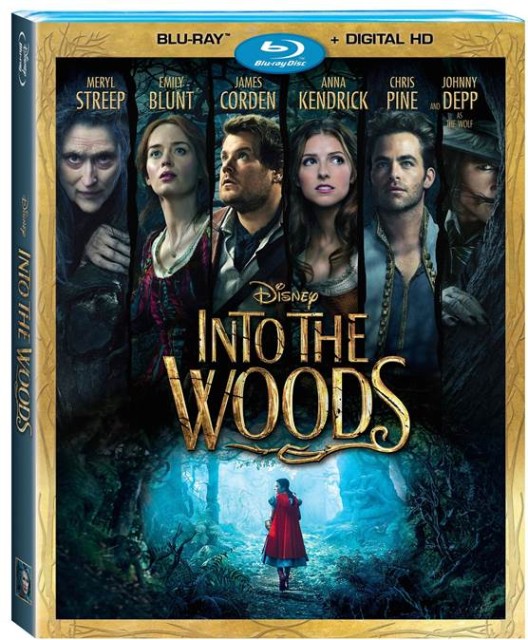 Includes An Exclusive, Never-Before-Seen Original Song
“She’ll Be Back” Performance by Meryl Streep
with Music By Stephen Sondheim and Lyrics by James Lapine

From the director of “Chicago” and the producer of “Wicked” comes a modern twist on the beloved fairy tales you thought you knew. Academy Award®-Winning actress Meryl Streep (Best Actress, The Iron Lady), leads an all-star cast in this enchanted adventure about daring to venture Into The Woods.

SYNOPSIS: Iconic characters, such as Cinderella, Little Red Riding Hood, Jack and the Beanstalk and Rapunzel, find their fates intertwined with a humble baker and his wife, whose longing to have a child sends them on a quest to reverse a witch’s (Streep) curse. With an all-star cast, this spellbinding adventure is everything you could ever wish for!

COMPOSER: Stephen Sondheim (Sunday in the Park with George)

Meryl Streep performs a compelling new song that sheds a little more light on the Witch’s relationship with Rapunzel. This never-before- seen composition was penned especially for this movie by Stephen Sondheim and James Lapine, and is seen here exclusively on Blu-ray and EHV.  With introduction by Director Rob Marshall.

There’s Something About The Woods

Journey into this mysterious forest to discover how this compelling, new musical was made. Meet Director Rob Marshall and his award-winning team of artists and craftspeople, see how the woods were brought to life…and what they represent to the story…and to all of us.

The Cast As Good As Gold

Deeper Into The Woods

Get direct access to the musical song segments from the film, with optional sing-along lyrics.

DVD:
Deeper Into The Woods
Magic of the Woods

Disney Movies Anywhere (DMA) is an engaging and family-friendly cloud-based digital movie service that makes it simple to buy your favorite Disney, Pixar and Marvel movies once and watch them anywhere.  With DMA you can explore Disney’s library of over 400 eligible digital movies, discover hours of new and exclusive short-form content, and watch your digital movies from the comfort of the living room or across multiple mobile devices.   In addition, you can redeem Digital Copy codes found in Disney, Pixar and Marvel Blu-rays and DVDs, as well as earn Disney Movie Rewards points with every digital purchase.  Sign up and access Disney Movies Anywhere for free on DisneyMoviesAnywhere.com and through the Disney Movies Anywhere iOS and Android apps. Users can then simply connect their iTunes, Google Play and/or VUDU at VUDU.com/DMA accounts to begin enjoying their Disney, Pixar, and Marvel digital movie collections across platforms and devices.

ABOUT THE WALT DISNEY STUDIOS:

For over 90 years, The Walt Disney Studios has been the foundation on which The Walt Disney Company was built. Today, the Studio brings quality movies, music and stage plays to consumers throughout the world. Feature films are released under the following banners: Disney, including Walt Disney Animation Studios and Pixar Animation Studios; Disneynature; Marvel Studios; Lucasfilm; and Touchstone Pictures, the banner under which live-action films from DreamWorks Studios are distributed. The Disney Music Group encompasses the Walt Disney Records and Hollywood Records labels, as well as Disney Music Publishing. The Disney Theatrical Group produces and licenses live events, including Disney on Broadway, Disney On Ice and Disney Live!.