Get the Music Before the Movie When THE HOBBIT: THE BATTLE OF THE FIVE ARMIES ORIGINAL MOTION PICTURE SOUNDTRACK is Released 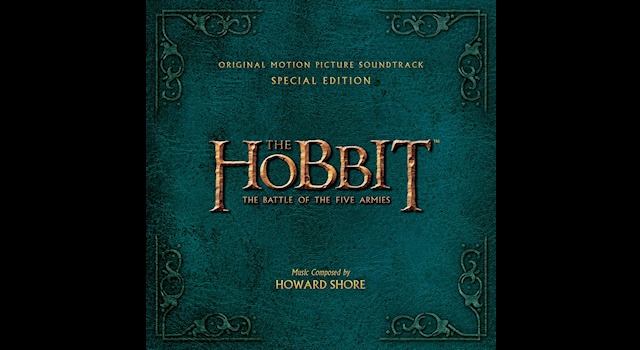 Here’s some excellent news: the soundtrack for The Hobbit: The Battle of the Five Armies is going to be released before the movie, as they’ve done in years past for the Middle-earth movies. This means that, as you stand in line for hours for the premiere, looking more and more hobbitish with every passing hour, you can hum the tunes to come, and maybe even teach the lyrics to the Billy Boyd song to the people surrounding you. Thank you, WaterTower Music!

So mark your calendars for December 9 to get your hands on the two-CD set, unless you want the Special Edition like I do, in which case you have to wait until December 16. You’ll have to cram to learn all the songs before the next day premiere, but I know we can do it!

THE HOBBIT: THE BATTLE OF THE FIVE ARMIES 2 CD SOUNDTRACK SET
TO BE RELEASED DECEMBER 9TH BY WATERTOWER MUSIC

(November 13, 2014 – Los Angeles, CA) – WaterTower Music has announced the release of the soundtrack to The Hobbit: The Battle Of The Five Armies, with music composed by Academy Award® winner Howard Shore, one of film music’s most respected, honored, and active composers and conductors. The soundtrack also contains an original song performed by Billy Boyd, who starred as Peregrin Took in The Lord Of The Rings Trilogy. The soundtrack will be released in two configurations: a standard 2 CD set and a Special Edition set, also with 2 CDs, and featuring extended tracks, bonus tracks, and expanded liner notes. On December 9th, both versions of the soundtrack will be available digitally and on CD, except the 2CD Special Edition, which will be available for purchase on December 16. Academy Award-winning filmmaker Peter Jackson’s The Hobbit: The Battle Of The Five Armies, a production of New Line Cinema and Metro-Goldwyn-Mayer Pictures, is the third in a trilogy of films adapting the enduringly popular masterpiece The Hobbit, by J.R.R. Tolkien. The film will be released in theaters worldwide on Wednesday, December 17, 2014, with select international territories releasing on December 10, 2014.

The Battle Of The Five Armies is Howard Shore’s final musical voyage to Middle-earth – concluding his work with director Peter Jackson on both The Lord of the Rings and The Hobbit trilogies.

Also included on the soundtrack is “The Last Goodbye,” performed by The Lord Of The Rings Trilogy star Billy Boyd, which he co-wrote with filmmakers Peter Jackson, Fran Walsh and Philippa Boyens. “Billy is not just a wonderful actor but also an extremely accomplished singer/songwriter—we are so glad he agreed once again to share his talent with us,” the filmmakers said jointly. “We cannot imagine a more perfect voice to carry us away from the shores of Middle-earth…one last time”

The Hobbit: The Battle Of The Five Armies Original Motion Picture Soundtrack on WaterTower Music will be available on December 9, 2014, and is currently available for pre-order at iTunes and Amazon. The track listings for the 2 CD Standard edition and 2 CD Special Edition are as follows:

FILM SYNOPSIS
From Academy Award-winning filmmaker Peter Jackson comes The Hobbit: The Battle of the Five Armies, the third in a trilogy of films adapting the enduringly popular masterpiece The Hobbit, by J.R.R. Tolkien.

The Hobbit: The Battle of the Five Armies brings to an epic conclusion the adventures of Bilbo Baggins (Martin Freeman), Thorin Oakenshield (Richard Armitage) and the Company of Dwarves. The Dwarves of Erebor have reclaimed the vast wealth of their homeland, but now must face the consequences of having unleashed the terrifying Dragon, Smaug, upon the defenseless men, women and children of Lake-town.

As he succumbs to dragon-sickness, the King Under the Mountain, Thorin Oakenshield, sacrifices friendship and honor in his search for the legendary Arkenstone. Unable to help Thorin see reason, Bilbo is driven to make a desperate and dangerous choice, not knowing that even greater perils lie ahead. An ancient enemy has returned to Middle-earth. Sauron, the Dark Lord, has sent forth legions of Orcs in a stealth attack upon the Lonely Mountain. As darkness converges on their escalating conflict, the races of Dwarves, Elves and Men must decide—unite or be destroyed. Bilbo finds himself fighting for his life and the lives of his friends as five great armies go to war.

Directed by Peter Jackson, The Hobbit: The Battle of the Five Armies features a screenplay by Fran Walsh & Philippa Boyens & Peter Jackson & Guillermo del Toro, based on the novel by J.R.R. Tolkien. Jackson also produced the film, together with Carolynne Cunningham, Zane Weiner and Fran Walsh. The executive producers are Alan Horn, Toby Emmerich, Ken Kamins and Carolyn Blackwood, with Philippa Boyens and Eileen Moran serving as co-producers.

New Line Cinema and Metro-Goldwyn-Mayer Pictures Present a Wingnut Films Production, The Hobbit: The Battle of the Five Armies. The film is a production of New Line Cinema and Metro-Goldwyn-Mayer Pictures (MGM), with New Line managing production. The film will be released worldwide on December 17, 2014, with select international territories releasing on December 10, 2014. Warner Bros. Pictures is handling worldwide theatrical distribution, with select international territories as well as all international television distribution being handled by MGM. www.thehobbit.com

You can (and should) preorder your copy of the special soundtrack from Amazon RIGHT NOW. Here’s the link: