Today for your pre-weekend enjoyment we have three new Gotham TV spots which continue to nicely set the stage for the premiere next month. But arguably even better, we some info on how Arkham Asylum will be incorporated into the first season of the series, and even a first look at the Asylum set.

It comes to us via the good people at Batman-News.com, whose reader Ray was recently on a set visit. So. Jealous. But first, read what showrunner Bruno Heller had to say about Hugo Strange and the Asylum to IGN:

Hugo Strange is going to pop up because we’re going to start dealing with how Arkham was created and why Arkham was created in the way that it was so, yeah, absolutely. It’s a Season One thing because in our telling of it the way Arkham was created and the why and how is one of the causes of the particular criminal climate in Gotham that allowed Batman to happen. The revolving door of Arkham is both a brilliant narrative device because it allows you to — you don’t have to kill people off, you can just put them in cold storage — but if you’re telling the story from the start you kind of have to explain, ‘What the f***? Why don’t you make that place a place people don’t escape from?’ We’re going to explain why it is the way it is and Hugo Strange is a big part of that.

Bayley Seton Hospital in Staten Island, NY is reportedly filling in for Arkham Asylum, and Batman-News.com reader Ray was told that they were filming episode 4, entitled “Lavender.” Here’s that look: 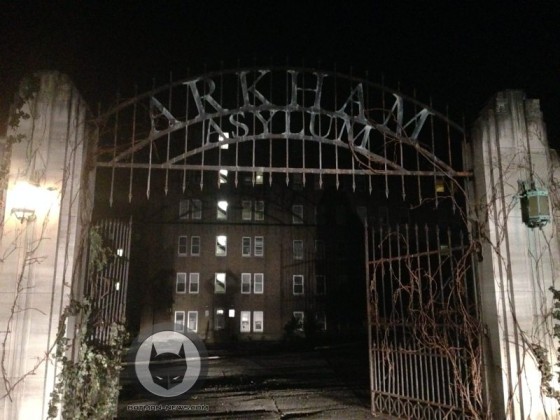 Excellent! And here are those TV spots:


TV Spot: Gotham – The Dark Side


I was able to check out the Gotham pilot at Comic-Con, and can happily confirm that the TV spots do a great job of capturing the dark, moody, edgy feel of the show. I can’t wait for more.