FINALLY. It’s FINALLY time to see the series I’ve been waiting for even more anxiously than I was for the premiere of Marvel’s Agents of S.H.I.E.L.D, and not just because typing S.H.I.E.L.D. is such an irritant. I loved Hayley Atwell‘s Peggy Carter from her first scene in Captain America: The First Avenger, was cautiously optimistic when they released the Marvel One-Shot, and over the moon when they confirmed the series and the star.

This is billed as an event series, meaning one whole story, seven nights and done. I hope to cherish every one. Tonight’s premiere is two hours, so don’t miss that second half. Also during tonight’s second hour . . . :

Make sure you watch #AgentCarter tonight 8:00 pm. And stay for the second hour to see the Ant Man trailer!!

That’s Tara Butters, executive producer/writer for the show. So make sure to watch! To properly prepare (or relive, depending on when you’re reading this), we have the poster, synopsis, two nice set-up featurettes, and the latest TV spot. Enjoy! 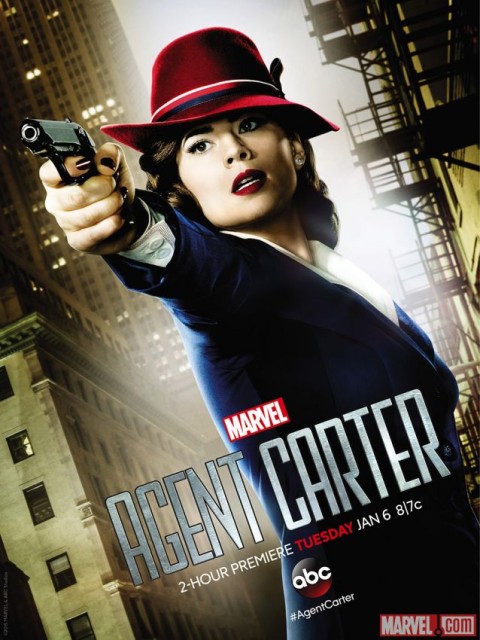 Years before Agent Coulson and his S.H.I.E.L.D. team swore to protect those who cannot protect themselves from threats they cannot conceive, there was Agent Peggy Carter (Hayley Atwell, Marvel‘s “Captain America: The First Avenger,” Marvel‘s “Captain America: The Winter Soldier“), who pledged the same oath but lived in a different time when women weren’t recognized as being as smart or as tough as their male counterparts. But no one should ever underestimate Peggy.